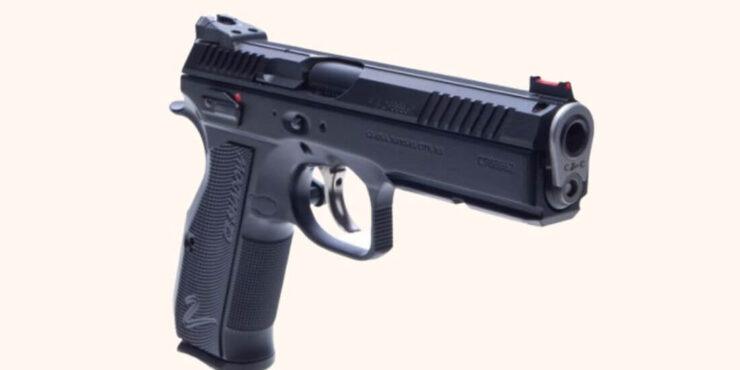 The era of the “wonder nine” is as wonderful as ever now, and one of the classic niner that has a lot of contribution in this is the good old trusty Ceska Zbrojovkas. Ever since their introduction back in 1975, they have been one of the most popular firearms all around the world. With the plethora of variants of the CZ 75 handguns out in the market, it gets a little tough to settle with one sometimes. And, one of the most common comparison topic in this regard is about CZ 75B vs SP01 Pistol.

Are you stuck making the same comparison too? Looking for some extra information that will help you to decide? Then you came to the right place. We will try our level best to eliminate the dilemma that you are in at this moment about CZ 75B vs SP01 Pistol.

Since the first flagship model, the pistol went through different variations. Each of the iterations is generally catered to an individual group of shooters. But all type of shooters seems to love every model that CZ comes out with. This CZ 75B is no different.

Just like every other model, this model also has some distinct features that set itself apart. One of them is the safety mechanism. It comes with a pin block mechanism. That is where the B in the name stands for in the label. The block will stop the firing pin to actuate if you accidentally drop the gun.

Besides that, it also comes with a manual safety lever on the frame of the gun. After locking the thumb safety, it will allow you to cock the gun and carry it with you. You can also switch between double and single-action operation.

In the case of the overall design, the unit has a construction of steel. Only the framed compacts are of alloy. The total length is 8.1 inches, the height stands at 5.4 inches, the width is 1.4 inches, and lastly, the weight of the gun is 2.2 pounds. As you can see, the unit is relatively compact.

The unit features a 4.6 inches barrel. On the top, it features a three-dots fixed sight. The dots are of photoluminescent color and will glow in the dark. That means you will be able to track your target accurately, even in the night.

Other than that, it comes with double column high capacity magazines. It can hold 16 rounds of bullets, which is comparatively higher than most of the pistols out in the market.

Lastly, it comes checkered plastic grips that are somewhat ergonomic. The slide-in frame, along with the grip, will let you get better control over the recoil and land your shot accurately.

From recent stats, the SP01 has become one of the go-to options for tactical operations, competitions, and people also pick it as a personal defense weapon. Apart from that, custom manufacturers are regularly updating the model with new enhancements in one part or another.

Among all the available variants of CZ that are in the market today, very few of them have such stock sights like this one. The front one is equipped with optical fiber, and the rear one features a HAJO style sight. Both of them combined will allow you to acquire your target comparatively quicker.

Unlike most of them, it does not come with any firing pin block. It eventually reduces the overall trigger draw, distance of reset, and simultaneously improves the travel properties of the combat style trigger. Other than that, it comes with a custom made hammer to enhance and smoothen the trigger pulls.

The pistol features a manual ambidextrous safety lever. It will allow you to switch between the single action or double action swiftly.

Moving on to the construction of the gun, it features a full steel frame. The overall length of the unit is 8.53 inches, which makes it one of the largest pistol in the series. It also has contoured angels on the handle to promote comfort.

Besides that, the weight of the unit is 2.9 pounds. The extra weight mostly comes from the elongated barrel. It lengths at about 4.9 inches and is a bit top-heavy. The heavy barrel eventually helps in reducing the recoil and kick of the gun.

In the case of the overall ammo capacity, it comes with a magazine that can hold 17 rounds. Depending on the variation of the model, you will either get rubberized grips or G10 panels. Both of them are adequately ergonomic.

Each of the guns has some distinct feature that sets them apart. We will go through some of the key factors. These are:

Designwise, both have a different footprint. While the CZ 75B somewhat keeps the classic design of the CZ 75 compact, SP01 deploys its twist in the design. The only difference between the original and 75B is the slightly elongated barrel.

On the other hand, SP01 has contoured curves all around that body. So, if you are a fan of the classic design, you might want to put the 75B first on your list.

Even though they have the same construction material, the dimensions are different. Whereas the 75B has an overall length of 8.1 inches, the SP01 is 8.53 inches.

The same goes for weight too. As the SP01 features a longer, top-heavy barrel, it is about 0.7 pounds heavier than the 75B. From these comparisons, you can guess that the 75B will be a little bit easier to conceal. But, with proper techniques, you can easily carry SP01 too.

Both of them have a different ammo capacity. Even though the difference is not that much in comparison, but one bullet can make an impact in specific scenarios. The 75B can hold 16 rounds in the magazine, while the SP01’s maximum capacity is 17.

While the CZ 75B comes with regular three-dot night sights, the SP01 takes things up a notch and includes fiber optic sight in the front. The HAJO style rear sight enhances the overall sight of the SP01 even further.

Which one is the most tactical version of the SP01?

There are many custom variations of the SP01. According to us, the most tactical one among them would be the ACCUSHADOW 2.

Among both the guns, which one has a modern design?

When comparing the overall design, we like both of them. But, if we were to differentiate, the 75B sports a classic design that is reminiscent of original CZ 75 compact. On the other hand, the SP01 sports contoured curves on the handles and barrel, which might make it look a little bit modern.

What does the manual safety lever bring in the table?

With the manual safety lever, you will be able to cock the gun and carry it with you. It removes the hassle of cocking the gun every time you draw it out. With this, you will also be able to switch between single and
double action mechanism.

What is the function of the block pin?

The block firing pin is just an additional safety mechanism. It makes sure that in case you drop the gun, the gun does not fire.

Can I get my unit with different grip panels from the factory?

CZ themselves will not ship the gun with customized grip panels to you, but some custom manufacturers will. You can also get aftermarket panels and attach them by yourself. By only removing two screws from the body, you will easily be able to swap them out.

To conclude, we hope that you got the extra help that you were looking for, and the topic of CZ 75B vs SP01 Pistol is a little bit clear to you. We would like to end it here by wishing you good luck and hoping that it is now easier for you to choose one in between them.