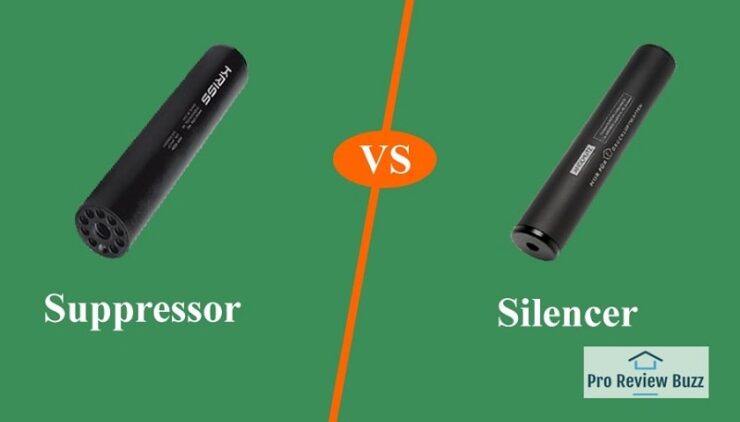 Suppressors or silencers reduce a gunshot’s sound by slowing down propellant gases’ into the open air. For that reason, the barrel’s diameter is usually smaller than the size of the chamber. The bigger size of the chamber creates turbulence as the gases hurriedly pass through the silencer. The suppressors transform some of the noise to heat energy. What happens is that the chambers or baffles in the silencer direct the noise and, in so doing, convert it to heat. Let’s learn about the differences and similarities of suppressor vs silencer.

What is the difference between suppressor and silencer?

Some people believe that the suppressor eliminates the muzzle flash while the silencer reduces a gunshot’s sound. The only problem is that you cannot silence a gun completely. You can only reduce the sound to a certain degree, which in most cases is about 30dB. That may depend on the length of your silencer or barrel or whether the bullet is subsonic or not.

Hiram Maxim invented the silencer. He got a patent in 1909 for his product. He was able to market it very well, and the name silencer became widespread. The fact that it was common in television shows made the name stick. Later on, people realized that you could not silence a gun; you can only suppress its sound. The suppressor is, therefore, the more accurate name.

Similarities between suppressor and silencer.

suppressor vs silencer refer to the same thing. You can interchange the two words. The law regards the gun accessory as a silencer, although the manufacturing industry people prefer to call it a suppressor.

What you need to know about suppressor vs silencer

The media makes us believe that silencers make guns silent. The truth is that the people in the surrounding area can hear the sound when there is a gunshot. This article will shed some light on what is true in regards to suppressor vs silencer. Below are some facts:

The suppressors reduce that sound by creating more room for the gases to cool and dissipate before getting to the open air.

The silencers increase accuracy, reduce the felt recoil as well as the gunshot sound. With a suppressor, an unsuppressed gun can move from 165dB to a sound of 134dB.

Considerations whenbuying a suppressor or a silencer

The semi-auto centerfire pistol suppressor has a spring-piston that balances the backward movement of the slide. That prevents the handgun from jamming whenever you use it. It would be best if you did not use such a suppressor for a fixed barrel gun.

To outfit your bolt–rifle with a silencer or suppressor, you need a threaded barrel. Ensure the thread specs match those on your rifle.

We could argue that silencer is the legal term for the gun accessory that reduces a gunshot’s sound, while suppressor is the same device’s technical term. It is important to note that you cannot eliminate a gun’s sound and that it is legal to own or possess a suppressor in most parts of the U.S.