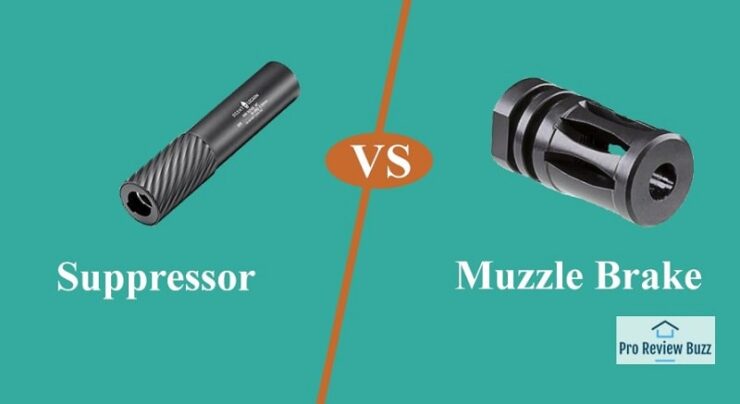 If you’re looking for increasing your accuracy on shots countering the recoil effect, which one “muzzle brake vs suppressor” should you pick?

Muzzle Brakes are devices that are connected at or integrated into the construction of the muzzle or barrel of a gun or cannon launcher to redirect a portion of the gas produced during rife to counter the recoil motion that causes the muzzle to rise considerably, affecting the gun or cannons accuracy.

Muzzle brakes or recoil compensators were initially introduced as recoil measures in artillery. They became very popular in many anti-tank guns, especially those attached to tanks, to reduce the area needed to take up the strokes of recoil and kickback.

The recoil control created by the muzzle brake has led to its implementation on different types of rifles and pistols, which has greatly increased the accuracy of guns. The term muzzle Brakes refers to the device used on large arsenals like cannon sand tanks, but when they are used on rifles, they are referred to as compensators.

When fired, the reaction of a gun muzzle can be called a muzzle rise, muzzle climb, or a muzzle flip, and the level to which a gun recoils are determined by the length of the barrel, which is measured from the grip line to the end of the barrel end.

Difference Between Suppressor and Muzzle Brake

When faced with the challenge of choosing between a suppressor and a muzzle brake, what choice would you make? The decision of which is better dramatically depends on what mission you are undertaking or the results you want.

If you are going on a stealth mission, a suppressor will be the perfect muzzle to mount. This is because a suppressor will enable you to sneak up on your enemies and shoot them without really alerting their reinforcements. At the same time, a muzzle brake, in this case, will only alert the enemies of your presence through smoke clods and fire flashes.

In contrast, if you are going on a mission that requires accuracy and there is no need to sneak up on your enemies. A muzzle brake would be ideal since it will help you increase your accuracy on shots countering the recoil effect.

However, many people hold that the most effective muzzle to mount on your rifle or gun is a suppressor since suppressors can offer both worlds. A suppressor can reduce the sound created when firing, and it can also reduce the firearm’s recoil effect.

The muzzle brake functions by redirecting the propelled gas when a gun is fired upward through holes on the muzzle, which causes a downward force on the barrel end hence countering the initial recoil, which in most cases directs the barrel upwards.

Additionally, the recoil force can make a barrel of a gun move sideways, a flaw that muzzle designers have identified and developed a muzzle that has holes on the side, ensuring the sideways recoil is countered.  It is important not that muzzle brakes do not eliminate recoil force but the work to reduce a large portion of the energy, which translates to an increased inaccuracy.

On the other hand, manufactures are developing muzzle devices that reduce the noise produced when a gun is fired. Additionally, it reduces the firearm’s recoil movement when fired by its working mechanism modulating the propellant gas’s speed and pressure. It moves through the muzzle, creating the muzzle’s suppression blast.

Suppressors are typically made of metal and mainly stainless steel or titanium. They are cylindrical and contain sound baffles inside them with a hollow center that allows the bullet to exit as usual. The functionality depends on the bullet’s standard projection through the suppressor muzzle. In the muzzle, most of the projectile gas created is forced into the long-convoluted escape path made by the baffles hence creating a prolonged state of the gas escape reducing the sound produced.

Suppressors were initially developed by Hiram Percy Maxim, the son of Maxim, a famous gun developer. HP maxim developed the suppressor while working on automobile muffles, he went on to get a patent for the suppressor, and on the documents, he called the device a silencer. It is important to note that a suppressor does not eliminate the sound created by a gun when fired but only reduces the phonic intensity of the gun muzzle sound of a gunshot.

What is the purpose of suppressors?

Guns have always been loud ever since the 1400s. It is estimated that a weapon that has no mounted suppressor reaches a decibel level of 165dB. A gunshot’s loudness is higher than the sound created by a jet engine by 15 dB, which puts it at 150dB.

The loudness of a gunshot is dangerous to the unprotected ear. Being exposed to gunfire sounds can damage your hearing over time. Medical studies hold that the threshold of pain to the ear based on noise stands at 140 dB.

The loudness of a gun short that exceeds the threshold of pain by 25 decibels is part of the reason why HP Maxim first created a suppressor. Maxim first began a suppressor in the 1900s to reduce gunfire’s loudness to protect the ears of those handling the gun. A suppressor successfully reduces the decibels on an unsuppressed firearm from 165dB to 134dB, bringing the level below the pain threshold.

Henry also created suppressors to provide stealth to gun wars. By reducing the sound made when a guy is fired, a suppressor has allowed gun holders to attack assailants and catch them without drawing attention to themselves.  This can is also classified as a function of a gun.

Apart from reducing the noise created by a gun when fired, suppressors have also been known to minimize guns’ recoil reaction. There was not an intended purpose of the suppressor but its functionality reducing air release speed, which translates to a lower recoil function.

Lastly, suppressors were also created as a source of wealth for the family of maximum.  The Maximum family plays a significant play in the development of guns, and the discovery of the silencer was a means to add more money into the family kitty. Most superpowers benefit from war activities. In the same way, when the worlds were at war trying to liberate themselves. Henry’s invention brought a lot of money to the family. This is evident since he went on to get a patent for the suppressors.

What is the purpose of a muzzle brake?

Muzzle breaks may appear on guns and tanks as a decoration making the rifle and tank look cool. However, a muzzle brake serves an essential function. There is an equal and opposite reaction; in this case, when a gun is fired, the opposite reaction is the recoil force created.

Secondly, muzzle breaks come in handy in the process of reducing the amount of smoke discharged when a gun is fired.  The smoke produced on firing a weapon or large artillery creates a smoke blind. That prevents you from seeing your target or seeing where the shell lands to help correct the aim. Additionally, the smoke created can be a weakness in stealth missions where the enemy can pinpoint your location through smoke clouds created after firing your weapon.

In conclusion, both muzzles are extremely important in the functions they fulfill. The choice of whether a suppressor is better than a muzzle brake is dependent on the desired outcome of the buyer. But considering that stealth is better than accuracy, the muzzle’s to get firmly leans on the suppressor side.