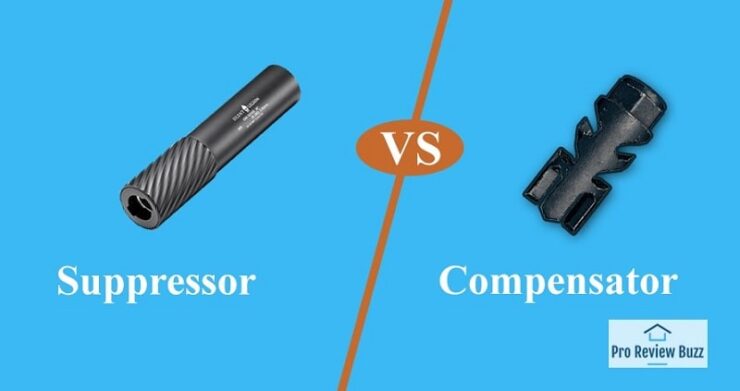 Guns are loud, and they have been loud ever since the 1400s. However, after approximately five hundred years of guns being loud, Hiram Percy Maxim developed the firearm suppressor while working on automobile mufflers.  A suppressor, commonly known as a silencer, is a gun device that greatly reduces the phonic intensity of the gun muzzle sound of a gunshot and the recoil in the event a gun is fired.

The suppressor functions by modulating the gas’s speed and pressure propelled from the muzzle, creating a suppressed muzzle blast. Suppressors are detachable metallic devices usually made of titanium or stainless-steel material. This device is cylindrical and contains internal sound baffles with a single whole burrowed from one end to the other to normally exit the bullet.

When a gun containing a suppressor is fired, the bullet exits the chamber normally but with less hindrance. However, the air that flows behind the bullet is forced into the baffle design’s convoluted escape paths, which prolongs its release. The gas prolonging has a slow-down effect on the gas where the kinetic energy escapes into a larger surface area, reducing the blast intensity and lowering the gun’s loudness.

In contrast, a compensator or muzzle brake, or recoil compensator is a device designed to be connected or a part of a muzzle, firearm, barrel, or cannon. The device is designed to reduce portions of propellant gases as a countermeasure to recoil effects and uncalled for muzzle rise.

Initially, the military first introduced muzzle brakes for artillery, a common feature in many anti-tank guns. These muzzle brakes were mounted on tanks to reduce the area needed for padding for recoil and kickback action. The main problem in firearms and pistols that is fixed by using a compensator is the recoil and rising of the barrel features when a firearm is triggered.

All Compensators function under the principle that they partly divert combustion gases at the gun’s muzzle end at a perpendicular angle of the barrel’s long axis. This angle ensures that the momentum from the diverted gas does not add to the recoil function. Instead, the angle at which the gas is directed affects the way the brake functions.

In simple words, when a compensator directs gases upward, there will be an exerted force downward, thus counteracting muzzle rise. Additionally, the idea of any device being added to the end of the muzzle ideally adds weight and increases inertia, and moves its center of gravity forward toward the muzzle, an effect that reduces recoil and directly reduces the muzzle rise when the gun is fired.

Differences Between Suppressor and Compensator

The difference between Suppressor and Compensator about their purpose is that; compensator is built to compensate for the upward movement of a gun barrel by creating countering motion during the fire, while suppressor muffles some of the sound produced when a firearm is fired. Without a compensator, it is more difficult to stay on target, while without a suppressor, it is hard to maintain stealth when shooting.

The other difference is that compensators have been used on large military arsenals like anti-tank guns to reduce recoil, while suppressors have only been used on firearms. It is impossible to silence or reduce the sound created when a tank is fired.

When it comes to both the devices’ shapes, compensators are more flexible in creating. A compensator does not have holes to the top; it can have holes on the side. For example, an AK-47 has holes to the side that held reduce sideways recoil. On the other hand, suppressors are limited in design since they can only be cylindrical. However, they are not limited in terms of length.

Lastly, compensators can be hazardous to the one firing the gun in that they throw dust and debris clouds towards the gun holder. Additionally, the dust cloud created can give up an individual’s location to an assailant, potentially risking their life. In contrast, suppressors do not endanger the gun holder’s life since air is directed to the front. Moreover, the silencing effect of the device gives an added advantage of stealth to the gun holder.

Similarities Between the Suppressor and Compensator

The other similarity between the two devices is that a compensator and a suppressor can be detachable devices attached to the front of a gun. These two guns are small; however, a compensator might be shorter than a suppressor.

Thirdly, these two devices have a similarity that stands out. Both devices in their functionality fail to create a situation of total control. A compressor fails to counter the recoil motion fully; the device partly reduces the gunfire’s recoil motion, while a suppressor also fails to silence the gunfire completely. It only muffles the sound created by a gun when it is fired, which means it still produces a suppressed noise.

Lastly, both devices shift the balance of advantage to the holder of the devices. A compensator acts to compensate for the recoil created by the weapon when fired. The reduction in recoil increases the weapon’s accuracy making it easier to spray the enemy using an automatic assault rifle and sub-machine guns. Similarly, suppressors function by reducing the sound created when a gun is fired; this gives the holder the advantage of stealth and an element of surprise. The muffled sounds of the gun will not alert the enemy.

Facts About Suppressors and Compensator

Many miss information concerning suppressors has been created by movies, video games, and tv. These gadgets have shifted the truth of how suppressors work, but this section sets the record straight.

A suppressor does not fully silence a firearm but only works to reduce the sound when a gun is fired. Interestingly the decibel level of an unsuppressed gun is 165dB, which is higher than that of a jet engine by 15 dB.  140dB is the threshold of pain. Any exposure to sounds above this level destroys your eardrum over time.  Additionally, a suppressed rifle has a decibel level of 134 dB, close to the sound of a jackhammer (130dB).

In states like New York and California, owning a suppressor comes with hefty paperwork and large ATF tax stamps. Additionally, the clearance process is also slow and takes about six to twelve months to get the process approved.

Surprisingly, not many people prefer using suppressors, given that they help protect your hearing and give you a stealth advantage. Between the periods 1995 to 2005, only 15 federal cases saw the use of suppressors in the crime commissioning. This goes to show that many people prefer to go loud and embrace the sound of a gunshot.

The compensator acts as the best friend of any soldier with a fully automatic assault rifle. It reduces recoil, which means that you can spray bullets at your enemies in comfort without worrying about getting tangled up or losing accuracy while fighting on the battlefield.

A compensator is believed to reduce recoil based on the holes on the device; however, the weight added to the gun by a compensator plays a part in this process. The added weight and the pull of gravity go a long way to stopping the gun’s upward shift when fired.

Compensators, in some cases, have become hazardous to the person operating the gun. In motors, some bombshells are faulty, and when they are fired from a motor, they malfunction and explode in the compensator. This explosion endangers the life of those operating the arsenal. As much as these cases are minimal, it is interesting to know that such a situation can happen.

What to Consider Before Buying a Suppressor or a Compensator

The choice between buying a suppressor and a compensator is bombarded with several considerations. It is important to consider the two devices since their functionality will bring a difference in results. Hence the results you won’t need to consider the different functions of the devices as mentioned above.

By choosing between these two, you are ideally deciding between stealth and accuracy. This is the biggest consideration to be made in this case since compressors increase your accuracy while suppressors reduce the noise created by your firearm.

A compensator is used to counteract the upwards movement of a gun barrel during firing, while a suppressor muffles some of the sound produced when a firearm is fired. Without either one, it would be more difficult to stay on target or maintain stealth respectively.

The best way for you to make this decision about which product will work better in your situation depends largely on what type of shooting you are doing and where you plan to use your firearm. If you’re looking for accuracy over stealth then go with a compensator; if not then opt for a suppressor instead!