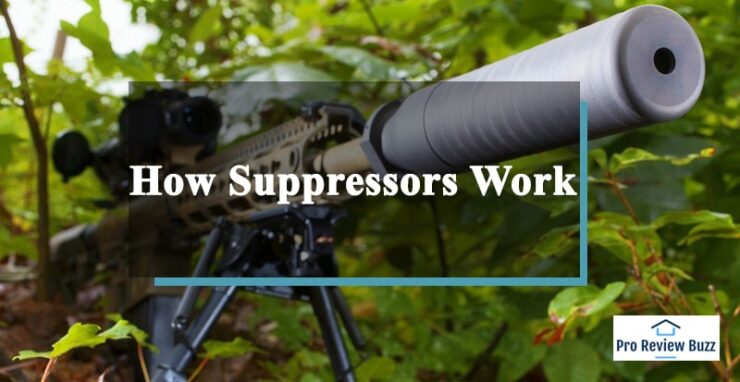 Although the shooters and spinners are commonly seen in Hollywood movies, they have led some people to develop the desire to own firearms. You might have realized some guns don’t make any significant noise.  If you wonder what makes the firearm doesn’t make noise, then it uses suppressors.  In this article, we will understand what a suppressor is and how suppressors work.

What is a Suppressor?

A suppressor is a device that minimizes the sound and light intensity of the gun when shot. When a fire gun releases a gas, the suppressor controls it. It is also known as a silencer and sound moderator.

What are Suppressors Made of?

A suppressor is made from high-quality metal alloys, including steel, aluminum, and titanium. The materials withstand the force of the expanding gases and cool them hence suppressing the sound.  Let’s discuss the 3 main materials which are used in suppressor construction and cleaning process;

You may think suppressors silence a firearm when fired, but installing it can be challenging for a beginner. When you trigger a gun, it causes a significant release of gases and heat, which, when combined, results in a loud sound that comes from a gun. If you insert the suppressor in a firearm and pull it, the suppressor causes a slower release of heat and gas. Suppressor slows the gas released and reduces sound simultaneously; hence no loud bag is released. That’s why suppressors are referred to as silencers.

The main suppressor’s mounting design are:

Suppressors are classified based on how they work because they tell you a bit about the different end uses. Here are different types of suppressors:

Types of Suppressors by Use case/ Host gun

These types of suppressors are constructed for the higher pressure and demands of centerfire rifle use. They can be used with good effect on rimfire rifles and some handguns. The rifle suppressors are mainly used on rifles.

They are the most affordable suppressors because they are made for the low-power and low-pressure rimfire rounds in use. Rimfire suppressors also designed to suppress .22 and .17 magnums and smaller. They are used for rimfire guns since they are smaller in size and weaker constructions than suppressors for centerfire rounds. Despite being cheaper, they can only be used on rimfire guns.

Despite the shotgun suppressor being bulky, it comes with superb technology making hunting, skeet shooting, and tactical shotgunning more comfortable and quiet.

Type of Suppressors by Function

There are two main types of suppressors by function, i.e., monocore and stacked baffles.

A baffle stack suppressor is designed with a tube that is attached to your firearm. It reduces noise by creating more space for turbulence. The baffle tube is sealed with front and rear caps.

The monocore suppressor is made of baffle material and looks like a solid cylinder. The cylinder is inserted into a tube.

If you want to buy a suppressor, you will enjoy the following benefits:

Best Places to Buy a Suppressor

Let’s look at some various places to purchase a suppressor:

One of the best places to purchase a suppressor is Silencer Central. You need to log in to their website and choose the suppressor you want.  They also allow you to chat over the phone with them if you want advice on which suppressor will suit your needs and preferences.

Secure Identity Documentation Kiosk (S.I.D. Kiosk) will help you in the suppressor buying process. After you purchase a suppressor from Silencer Shop, you will head to an authorized Powered by Silencer Shop dealer. After that, all the other transactions take place through the S.I.D. Kiosk.

You can also prefer buying the suppressors from online retailers, including Rainier Arms and Brownells. You are sure to find whatever type of suppressors you need.  Dealers with this ability to handle NFA items such as suppressors are known as Special Occupational Taxpayers. For online stores to get your suppressor to you, you need to find an FFL who is also a S.O.T. complete the transfer. It is advisable to grab a copy of the dealer’s FFL and S.O.T. to provide to the retailer before you buy online.

Last and not least, you can purchase from the shops which are stocked with suppressors. If you want to buy from a gun owner, take care of that through a service or an attorney since most shops can help you.

How Hot Do Suppressors Get?

When a suppressor is fired rapidly, the temperature increases about 300-500 degrees Fahrenheit. The suppressor can be as hot ad 800-1000 degrees. It could be due to many factors, including suppressor quality, ammunition used, weather conditions, and firing rate. It can get hot enough to create waves coming off the top.

The various factors you need to consider when purchasing a suppressor that fits your firearm and its intended use. They include:

Although some suppressors require cleaning and serving, others don’t. For instance, lower caliber suppressors, including pistol and .22LR suppressors, require maintenance since when neglected, carbon and lead deposits build-up.

On the other hand, high-powered centerfire suppressors can “self-clean” even when small deposits of carbon build-up. A layer of carbon in the internal baffles helps in dissipating heat. The suppressors are self-cleaning by using pressure from behind the projectile to push the carbon deposit out, making cleaning easier for the shooter.

It has become easy to maintain and keep the modern suppressor. You don’t have to clean them as you need to dunk the suppressor in a container with solvent, let it for some time, and then pour it out and dry.

What Qualifications are needed to purchase a Suppressor?

However, only 8 states don’t permit people to own suppressors. They include New York, California, Illinois, Delaware, Massachusetts, Rhode Island, New Jersey, and Columbia.

Q: Can I use a suppressor for multiple firearms?

A: Yes, as long as the firearms accept suppressors.

Q: What is the difference between a suppressor and a silencer?

Q: Do you need a special license to own a suppressor?

A: No. There are just rumors that you need to have a “Class 3” license to own a suppressor.

Q: Can you use one suppressor for different calibers?

A: Yes, a larger suppressor can be used with the appropriate suppressor adapters for small caliber weapons.

Q: How will a suppressor attach to a firearm?

A: You can attach a suppressor in 3 ways:

Q: How quiet is a suppressed firearm?

A: It depends on how the suppressor is inserted into the firearm. If inserted correctly, then the gun will be quieter.

Q: Is it legal to own a suppressor?

A: It is not illegal to own a suppressor in federal law. However, these are the basic requirements to own one:

Although suppressors are effective and reduce noise levels, they still make sufficient noise that can damage hearing. If you are using or are planning to buy a suppressor, ensure you use it with hearing protection.