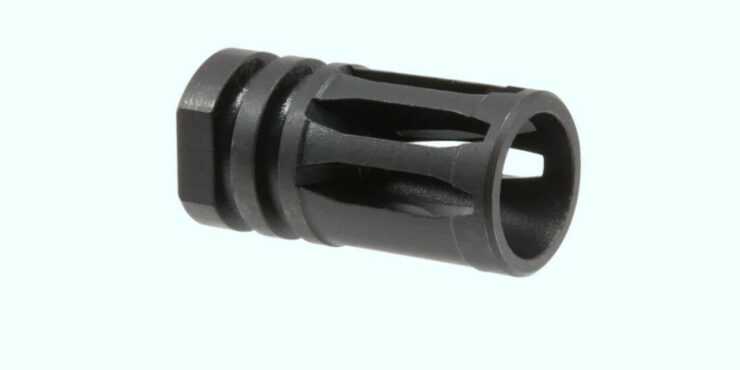 A flash hider or a flash suppressor is a device that is attached to the muzzle of a rifle that hides the visible footprint while shooting. It does this by lowering the temperature of the gasses around the muzzle so how do flash hiders work?

For carbine length firearm, this feature is important as these rifles can heat up easily and affects the shooter’s visibility in darker atmospheres. This device often also hides the flash from the target, which is an important aspect if you’re targeting incognito.

And a flash hider is certainly the desired device for any professional. But this article will help even a beginner understand how do flash hiders work and which types are considered the best in the market!

Flash hiders are often confused for muzzle breakers, and even though both are equally necessary and have seen similar advancements since its creation, yet knowing the difference is important for tactical reasons.

A flash hider is used to lower the visible flash on the muzzle while firing, especially in low light settings. Muzzle breakers, on the other hand, reduce recoil and climb, especially for handguns and rifles with strong recoil ability.

There are certain areas, owning a flash hider is illegal, but you can still capture its functionalities with sound suppressors, as they are often equipped with the ability to hide recoil, flash, and sound.

Flash hiders are often seen as a dangerous accessory to many of the anti-gun activists and politicians. They are often misconstrued as a device to conceal your firearm, but they only exist to reduce the flash from blinding the user, and it certainly doesn’t make firearms any more dangerous or violent.

Due to the legal restrictions and its functionalities, it’s best to research different aspects of this device before investing in them.

Flash hiders are mostly used for AR rifles, especially in terms of tactical shooting. The flash produced from the muzzle blast can be blinding if the shooter is using night vision goggles.

However, these devices are a part of modern technology, as earlier versions of rifles produced almost no flash, as they had longer barrels for the gun powder to completely burn off inside the barrels.

Rifles with shorter barrels are much more convenient, but this means the powder isn’t able to have enough time to burn inside the barrel, which creates a flash while the bullet exists.

How Do They Work?

To protect the barrel crown and reduce the flash of firing in rounds, a metal cone was created during WWII to hide the shooter’s position. From self-defense during military application to hunting in the dark, flash hiders have become a necessity for any certified gun enthusiast.

The burning gasses during a muzzle flash is cooled down to be masked, or for other models, the gas is redirected to come out through certain holes in the suppressor. And the concept of a simple clamp-on metal cone from WWII is carried on by can-shaped suppressors.

But if you’re looking to conceal the noise feedback as well, a muzzle breaker and flash hider combo isn’t enough. Buying a multi-caliber sound suppressor is the best way to conceal all types of feedback, including flash.

Although barrels are usually specially equipped to handle flash hiders, if it’s not done properly, the rifle might blast and recoil downwards or even towards the user’s face.

If you’re worried about not being able to position the device every time, it’s best to talk to a professional about buying the necessary washer.
There are two washers that help align the flash hider to the barrel. They are crush and peel washers.

A crush washer is conical, and it flexes when the suppressor is tightened to the index, and a peel washer is lacquered together that peel away and thin out the layer of the washer to make a proper index.

And there are certain aspects of installing a flash hider that depends on the type of firearm you purchase, which is why it’s best to consult the owner of the rifle on the best and easiest method of installation.

Investing in a flash hider might be confusing at first, especially due to its overlap in design and legal restrictions in place under your country’s respective amendments.

But if you’re equipped with the knowledge of its functionalities, application, and proper installation process, then you can equip yourself with the right accessories without even batting an eye!