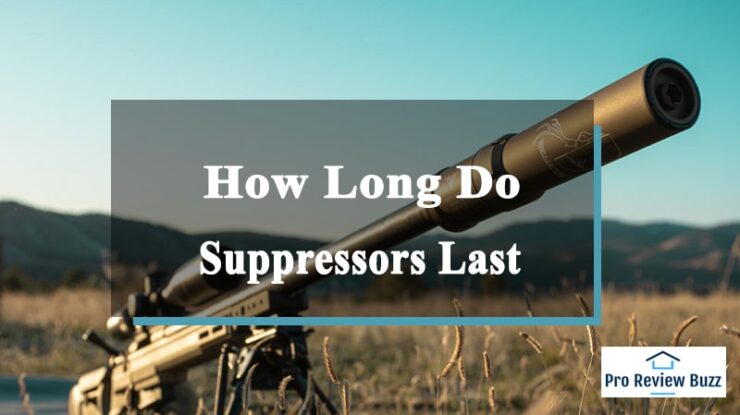 If you’re looking to buy a suppressor for your specific firearm, it’s best to know which model and type to invest in, as the durability of these machines tends to depend on the user.

These machines have been so heavily represented in modern media that it’s often difficult to decipher the myths and facts behind a suppressor.

There are also earlier versions of suppressors that function much differently than current models. And this is why it’s best to know their intricate functionalities before buying a suppressor for your firearm.

This article will help you understand how long do suppressors last, when to replace a suppressor, and how to use them in order to get the most out of your purchase.

Lifespan of a Suppressor

The lifespan of a suppressor is determined by a plethora of factors such as muzzle device, barrel length, and caliber. However, if you know how to maintain your suppressor, there should be no degradation to the overall quality.

A suppressor does not simply wear out, especially with modern technology that uses metal baffler, which is specifically created to not be worn down by triggering. If you properly mount your suppressor and remember to screw it tightly often, a suppressor should last as long as your firearm.

Although, there are older models that include metal mesh that does not last after a couple thousand semi-automatic fires. Or steel wool that degrades after a couple spaced rounds, modern suppressors are much more equipped to handle heavy firepower.

So, before investing in a suppressor, it’s important to note the type of material used to create it. Modern silencers have metal baffles that make them much more resilient and long-lasting.

How can you extend the lifespan of your suppressors?

It is not possible to specifically indicate the round count for how long your suppressor will last. This is because it can last as one round, while another can last for several decades. However, the following steps will help you to keep your suppressor working for an extended period:

Most suppressors are made of premium materials that make them durable and sturdy. They usually have a thicker outer body, internal baffles, and end caps that allow the bullet to exit the suppressor. Steel, aluminum, and titanium alloys are used to build suppressors. The kind of metal to use is determined by factors such as price, type of shooting, and the caliber being utilized. For instance, steel alloys are heavy though less expensive, while titanium alloys are lighter and long-lasting but more costly. Therefore, it is not justifiable to say how long a suppressor will last by just looking at the metal it is made from.

Suppressor makers and designers work together to ensure they develop convenient, easy, and impressive suppressors capable of decreasing noise significantly.

The suppressors’ basic design fall into two categories, as discussed below:

It is a tune-like design, where a stack is put inside the tube from a cone-shaped baffle. There before, only two versions of the baffle stack existed: K-baffle and M-baffle. Today, there is more than that. The baffles are designed such that there exist some spaces between them. These spaces are for gas expansion.

Baffles come in different shapes and are placed in the tube to have a tight or snug fit. Rear and front caps are used to seal the tube to trap the baffle stack inside. Both the rear and front caps are usually threaded to allow you to separate the suppressor for cleaning purposes. Cleaning the suppressor is essential since it prevents forming a hardened layer from the collection of lube, powder residue, and bullet material. The build-up can make the suppressor heavy without any effective baffles left. However, some rifle-caliber suppressors do not need cleaning as they do self-clean themselves.

In monocore design, the baffle stack is placed in a solid cylinder with holes, gaps, and baffles machined out of the metal’s bar stock, put into a tube. The main advantage of monocore design is that it can be developed into shapes that no cones’ baffle stack could be matched. The monocore is also heavier compared to a baffle stack of the same length and diameter. Also, the monocore’s extra contours help to make the suppressor quieter. It is also easy to develop a rifle-caliber suppressor that is easy to clean and disassemble.

How do Suppressors Work?

Suppressors function by trapping and holding high-temperature gas, high-pressure, and making it cool off and move it further via baffles’ series. Here, the baffles’ shape does not matter since the primary intention is slowing it down and cooling the gas. This results in a quieter suppressor to exit the barrel. However, some bullets like supersonic contribute to more noise though suppressors do not cater for that.

How a Suppressor can Get Damaged

It is usual for every gadget that handles gas under high temperature and pressure to wear and tear. For instance, a suppressor on a hunting rifle will wear less compared to a full-auto military gun. Heat causes significant destruction of the suppressor. This means that if you operate a hotter suppressor, the weaker it becomes and eventually breaks down within a short period.

Apart from the heat, another factor that significantly reduces the suppressors’ lifespan is poor installation. This happens when the suppressor is not well aligned, which results from baffling strikes. Baffle strikes come due to a poor-threaded muzzle that interferes with the suppressor’s correct alignment. In case you experience this problem, you can have your gunfire well-threaded by experts.

How to Repair a Damaged Suppressor

If you are shooting using your firearm with a suppressor and then gets damaged, these are the steps to follow to repair it:

You should inspect the gun first to check the damage. Ensure you don’t hold the hot suppressor with bare hands since it is harmful to the skin. Follow the right clearing and safety method before you inspect any damage.

When you find the suppressor is damaged, avoid using it since it can cause bullet instability, severe injury, and concentricity issues. Ensure you are safe before using it again.

If the suppressor has parts or whole is damaged to fall off or fly down, make sure the range is safe and get many other suppressors. Suppressors need to be replaced as soon as possible.

How to Mount Suppressors

Knowing how to mount suppressors as well as the material that’s best used for them is the most important part of maintaining and making sure the suppressor outlasts the barrel. There are several options to mount suppressors, which mostly depends on the type of firearm that you prefer to use.

To mount a suppressor on a handgun, it’s recommended that you use a direct thread. Just screw the suppressor to the muzzle of the gun until you trigger the shoulder and make sure it’s snug, which should keep it tightly mounted during shooting. It’s best to re-tighten it during use if it loosens.

However, direct thread mounts usually stay snug throughout multiple uses. Quick detach suppressors aren’t usually that common for handguns, so it’s recommended to not invest in them.

It’s always best to let the suppressor cool to room temperature before handling it. Quick detach suppressors are usually much more flexible, in terms of mounting. They are faster to attach than a direct thread, and it doesn’t detach during shooting. You can check out 223 rifles here.

How to Maintain a Suppressor

It’s best to invest in a suppressor that you can remove for cleaning, as these can get relatively dirty. If your pistol features an exposed lead round or pistol calibers with exposed lead bases, especially need to be cleaned often.

Some of these require tools to break down, so it’s best to talk to a professional and get them cleaned when needed.
Investing in a fixed barrel spacer is also an important part of maintaining your firearm. These spacers are put into the booster unit to lock it up, so it doesn’t oscillate with the mechanism during shooting.

Strengthen the Lifespan of Your Suppressor with the Right Equipment!

Taking good care of your suppressor by knowing which accessories to equip your firearm with is the first step to making it last much longer.
When you buy a suppressor, knowing which booster to add and the barrel length of your firearm is a large part of the investment.

It’s also recommended that you acquire a silencer with flexible mounting functionality, which will let you use it on a variety of firearms, so you get more bang for your buck!

Suppressors can last up to 100 years if they are well taken care of. Modern, well-built suppressors such as all-titanium, multi-caliber BANISH suppressor can last for your entire lifetime provided it is not abused. If you do not use your suppressor with high sustained fire rates, you are guaranteed that this is a long-term investment.

Suppressors are also known as silencers. They help to decrease the gunshot’s noise and recoil when shooting. It leads to better shot placement, improved accuracy, and more humane hunts. The suppressors also help alleviate noise complaints from people who live close to hunting land and shooting ranges’ surroundings.

There is no specific answer as to how long suppressors last, but several factors determine their durability. Some of these factors include design and construction, how you use the suppressor, and its material.

In case you have a full-auto firearm and an auto-use suppressor, then your suppressor will serve you for an extended period. Again, if you subject your suppressor to meaningful use, it will last for a long time. High fire rates will damage the suppressor compared to slow fire rates. If used appropriately, suppressors can last up to 100 years.