Dead Air Silencers and SilencerCo are among the most popular brands when it comes to high-quality suppressors. They’re at the top of the competition, which is why it’s inevitable to make comparisons between their products.

So much so that today we’re reviewing the Sandman S vs Omega 300. Throughout this article, we’ll discuss the most noteworthy features of these two remarkable suppressors. Let’s start with the Sandman S.

The Sandman-S is a suppressor that manages to be innovative while featuring components and technology offered by its predecessors. Once mounted, the silencer increases the efficiency of calibers like the 7.62mm rifle. It’s a compact, lightweight and effective suppressor indeed.

Thanks to the 18.5 oz of weight, maneuvering the silencer isn’t an issue in the slightest. After mounting it, the smaller firearms still feel comfortable on the hand, which should allow your aim to be precise and accurate.
Considering the silencer is compatible with 5.56mm up to the more powerful .300 Win Mag, that level of maneuverability is a welcome surprise.

Another recurring feature is the QD mounting system, which was present in previous silencers from the brand. This mechanism guarantees incredible precision, and it avoids losing the POI shift. Again, we see past technology used in a better way to improve the suppressor’s performance.

Since the suppressor doesn’t have any barrel length restriction, it’s an incredible choice for people that need an ultra-small silencer. Even though it’s a small accessory, the silencer will do its job properly with no frustrating issues at all.

In perspective, the Dead Air Sandman-S manages to be a long-lasting, efficient, and somewhat affordable suppressor.

Yes, it does require you to invest a rather high amount of money, but when compared to other silencers, you’ll find that there are more expensive alternatives out there. And even then, those expensive suppressors may not even be as good as this one.

The Omega 300 may have several years in its back, but it’s a suppressor that surprised customers back in 2015, and it continues to do it as of now. Undoubtedly, the reason this product is so great is because of the combined performance of technology previously featured in Saker and Harvester.

Combining technology seen in older suppressors is what creates the Omega 300, a short, quiet, and long-lasting silencer like nothing we’ve seen before. Some people may like this accessory more than others, but no one can deny its quality.

And the silencer measures 1.56” length, 1.56” diameter, and weighs 14 ounces only. Also, the build of the Omega 300 is incredible, as it features titanium, stellite, and stainless steel. Strength and durability are two things you can expect from this accessory.

But what can you do with the Omega 300? The suppressor is compatible with different calibers. It’ll work with 5.7mm flawlessly, and it also performs well while mounted on calibers such as the .300 Win. Mag.

There’s no denying that SilencerCo truly outdid itself as a brand while creating this suppressor. Upon ordering, the purchase also includes .308 and .223 end caps, ASR brake, and direct-thread adapter.

Of course, considering it’s an advanced, high-quality suppressor, the price is a bit high too. Is the money worth it, though? The answer is yes. This suppressor is durable, compatible with different calibers, and ultra-quiet, making it a long-term investment that you won’t regret.

So, there’s that. If you need an advanced sound suppressor, the Omega 300 is your go-to choice. Nonetheless, make sure to check the compatibility of your firearm. Otherwise, it’d be a total waste of money.

Differences Between the Sandman S and Omega 300

The following are the most noticeable differences between the two suppressors.

The incredible build an outstanding mount are among the reasons to consider buying the Sandman S. This suppressor is tough, and it handles abuse pretty well. Also, many would agree that the report shot of this is lower and less sharp than the Omega’s.

On the other hand, we have the Omega 300, which is a lighter suppressor capable of doing it all. You can use it on an SBR if needed, and the lightweight makes it just as effective on a precision rifle with a direct-thread mount.

When it comes to build quality and how convenient they are, both suppressors are great in their own right, although the Omega 300 is lighter. 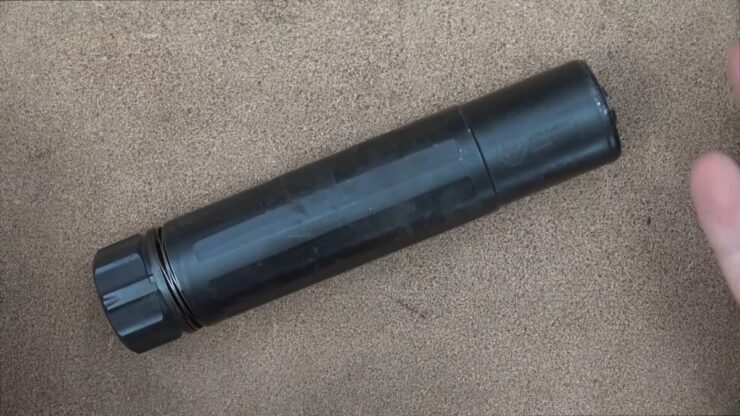 The sound tests prove that the Sandman S is the better pick out of the two, as the suppression worked perfectly to do the shooting without loud noises produced.

Even though the Omega 300 is quiet too, the quality of the sound isn’t as good as the Sandman S. It’s a bit complicated to explain, but it makes total sense once you try it yourself.

Although slightly different, both suppressors are equally convenient.

That’s what you should do precisely; try both of the suppressors. They’re both incredible, with the weight being one of the major differences between the two. If you don’t care about weight, go for the Sandman S. However, if you need a light can, go for the Omega 300.

It may seem like an easy way out of the question, but people that have used these two suppressors recommend using them both. One is heavier than the other, but that doesn’t have to be a bad thing either. Perhaps that could work to your advantage.

Sandman S vs Omega 300 may be fairly similar, but these two suppressors have significant differences that may make them less or more suitable for your purposes. Still, you can only tell the difference if you try them yourself.

Next time you’re considering to buy either of these accessories, make sure to give them a try to see which one feels the most comfortable for you. Only then you’ll be able to make your own conclusion on the Sandman S vs. Omega 300 debate.