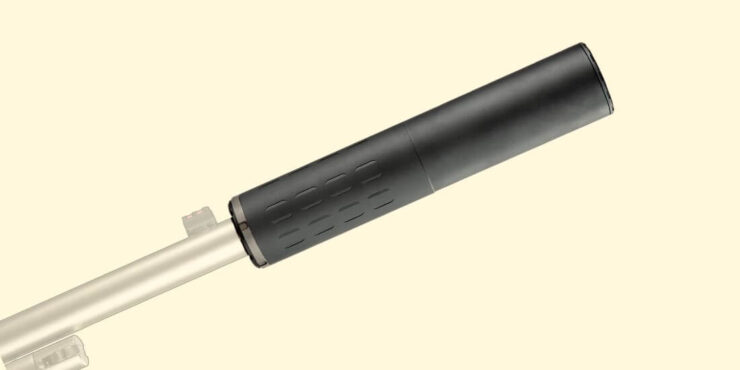 Are you looking for incredible suppressors? Well, you’re in luck! SilencerCo comes up with two offers that you can’t miss. Naturally, if you don’t want to try out both, picking just one would be the right choice, but what are the differences between the Silencerco Hybrid vs Omega 300?

Let’s take a closer look at the two suppressors to find out why they’d be a good addition to your arsenal.

Versatility is a pretty accurate word to describe this suppressor. You see, not only is the SilencerCo Hybrid a multi-caliber accessory, but it’s also multi-platform, compatible with handguns and rifles alike. If needed, it’ll work perfectly on 9mm ammo and submachine guns too.

The design of this suppressor is impressive. It features titanium and a Cerakote, grey finish for a clean and beautiful look. As for the baffles, the material used for their build is high-quality stainless steel.

Besides an incredible build, the suppressor is convenient too. It measures 7.8” long, featuring 1.57” of diameter. The weight is only 13.8 ounces, including the direct-thread mount. While using it for different calibers, the suppressor works delivering comfortable decibels.

While assembling the suppressor is a bit tricky, most customers will get it right in due time. It’s a process that requires introducing the right piston inside the piston housing, screwing, and securing the proper front cap afterward. Of course, the process varies depending on the caliber.

Part of the silencer’s versatility is due to the interchangeable front caps and the mounts. For instance, the front caps come in different calibers, with some of them being 9mm, 5.56mm, and 7.62mm, to name a few.
Thanks to the four direct-thread mounts, the couple of quick-release mounts, and ten piston options, the Hybrid is easily among the most flexible suppressors you could find.

Although customers can place the order requesting modular components, it may be a better idea to buy them separately. If you do it that way, you’ll be able to choose which parts you’ll need, saving a lot of money on components you may not ever use.

As with most multi-purpose accessories, people often have the regular concern that they work for a lot of applications, but they’re not particularly good at a specific task. However, that’s not the case with the SilencerCo Hybrid. This suppressor works well regardless of the task at hand.

In fact, the flexibility of this suppressor is one of the reasons why most people would consider buying it. After plenty of tests, the results continue to be amazing, making this product worth the money.

Coming out in 2015, the Omega 300 suppressor quickly surpassed everyone’s expectations by becoming one of the most sold items from SilencerCo. The success of this accessory lies in a combination of the tech featured in previous products like Saker and Harvester.

What was the result of that combination? Well, SilencerCo would claim it’s the shortest and quietest suppressor the brand has ever produced. Whether or not that’s true, we’ll leave it for you to decide.

The Omega 300 measures 1.56” of length, 1.56” of diameter, and it weighs 14 ounces only. Thanks to incredible materials like titanium, stellite, and stainless steel, the suppressor is a strong, durable accessory. Even though it isn’t cheap, this product pays off definitely.

Due to its design, the Omega 300 is compatible with different types of ammo. Just as it’ll work with 5.7mm decently, the suppressor will also do well with more powerful calibers such as the .300 Win. Mag.

Undoubtedly, SilencerCo did an outstanding job with this suppressor, and you can tell quickly upon receiving your order. The package includes the suppressor and end caps for .308 and .223. Additionally, you get ASR brake and the direct-thread adapter.

As mentioned earlier, this suppressor is one of the most expensive out there. However, considering its durability, compatibility with different calibers, and overall performance, the Omega 300 is a wise investment indeed.

If you’re looking for an advanced sound suppressor, the SilencerCo Omega maybe your ideal pick. As always, make sure to check the firearm is compatible with the length of the barrel and the caliber specifications.

Which Suppressor to Choose?

Answering this question is rather complicated because people have different opinions on the matter. Some would say that the Hybrid is the best, while many more agree that the Omega is far better. Still, there’s a great way for you to look at this debate and pick one of the two.

Figure Out What you Want to Do

If you’re not sure what you want to have down the road, the Hybrid is for sure a good pick. There’s no doubt it’s a heavy suppressor, but people looking for their first silencer would benefit a lot from having this one. It covers plenty of calibers, and the sound reduction is incredible.

But is the Hybrid any good? It is, but only if you’re considering to use large weapons. Larger calibers like .458, 45-70, among others, are great for the Hybrid. Keep in mind though, the weight and size of this suppressor may be too much for smaller pistols.

However, more experienced shooters would argue that the Omega 300 is the better pick between the two.
The Omega 300 is the most convenient choice due to its weight and length. Its design makes it work for both pistols and rifles if needed, especially if you’re working with 5.56, 308, and similar calibers.

To sum up, you want the Hybrid for big bores, and the Omega 300 because of its convenient weight and size.

Since both suppressors come from the same brand, making comparisons was almost inevitable. In this article, we’ve covered the basics of why and how these silencers would work well for you depending on your firearms.

So, now it’s your turn to choose which one is the most suitable between the Silencerco Hybrid vs Omega 300.