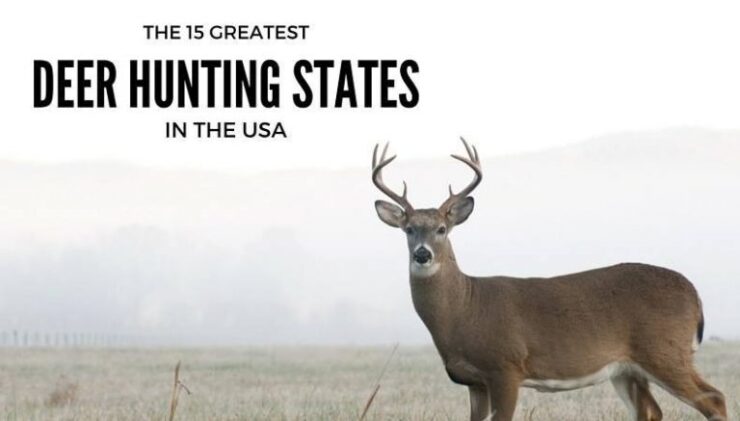 Deer hunting is a favorite pastime for many hunters across the United States. Most of these states allow deer hunting in the fall, typically in the months of September through November. However, deer hunting season, laws and limits vary from state to state. Here is a list of 15 of the best states to hunt deer in.

In Iowa the deer seem plentiful. Iowa is one of the best trophy hunting states in the U.S. in fact, over 20,000 hunters apply for one of the 6,000 nonresident licenses each year. Deer hunting season in Iowa typically is from October to December, however some youth hunting may start in September. They have different seasons for bow and gun hunting. Be sure to check out Iowa’s DNR for more laws, regulations and deer hunting limits.

The deer populations in Kentucky have steadily risen over the last decade making it a great place to hunt deer. They have also been known for some great trophy hunting. Kentucky’s deer hunting season is typically from September-December with different dates for bow and rifle hunting.

When you think about Wisconsin three things come to mind: Packers, Cheese and Deer Hunting. Wisconsin has great history and traditions built into their deer hunting season. The typical hunting season is between: September and January. There are various prices for tags and licenses.

Georgia’s deer population has definitely been on the rise in the last several years and their buck density is good. Their deer season is typically from September to October each year.

Kansas has a large amount of public land designated specifically for deer hunting. This state also has had fewer outbreaks of deer related diseases which allows for healthier, larger bucks and trophy deer. Overall it is one of the best states to actually hunt deer in. The state of Kansas has allotted different types of hunting deer between their season of September through January.

Half of the state of Nebraska is still very much wild and free. This state has so much public hunting land it makes it quite ideal for deer hunting. This state is also quite cheap and easy to travel to for hunting, making it a prime location. September through December is considered deer hunting season with designated dates for bow and gun hunting. Nebraska has two types of deer you can hunt mule deer and whitetail deer. Overall all this state has high ratings for its deer hunting. For more information, visit Nebraska hunting government website to learn about permits and deer hunting laws for that state.

The deer population in Indiana is above average versus other states. Also, this state has been known for their record breaking buck sizes. If you are looking for that trophy size buck this is the state to visit. It is rather easy to get a nonresidents license for this state.

Deer hunting is not as strong as it was a decade ago in Illinois. Disease has hurt some of their deer populations. However, their numbers are steadily rising again and there has been some recording break bucks found in Illinois over the past few years. It’s not as easy to get an Illinois nonresidents license however, they do a drawing for that. However, this is still a midwest state that will surprise you with their overall deer seasons and should be included in the Top 15! The DNR in Illinois will help familiarize you about laws, licenses and other deer hunting information.

The weather in Texas makes hunting there quite amazing. On average, roughly 600,000 deer a year a bagged. With that many deer and good weather, it makes Texas one of the Top 15 states to hunt in. The only downside to hunting in Texas is they don’t have a lot of public hunting land. But don’t let that persuade you from checking out this great state during deer hunting season. This Lone Star state is not a stranger to big bucks.

The state of Mississippi has a lot of public land to hunt on. Add the fact that this state has a large deer population and you are in a hunters paradise. They don’t see many trophy size deer but do not that persuade you from taking a hunting trip there. Most hunters bag at least two deer a season, making it a quite steady state to hunt in.

Minnesota has always been known for its great deer hunting. However, they are still in rebuilding mode right now. In 2015, the limit it to one deer per person. It was over hunted in the years prior and the state is trying to regrow the deer population. However, with the vast, beautiful land to hunt on it is still a great place to hunt. If you are interest in hunting in Minnesota please check out their government pages on hunting deer for more information.

Colorado has both white-tailed deer and mule deer. However, there biggest game seems to be mule deer. They are also well-known for hunting moose, elk and pronghorn. There is a little less public land than most state to hunt on but the big game in Colorado is still quite impressive.

The state of Michigan, especially its upper peninsula has a great population of deer for hunting. Their season typically starts in October and runs until January, with different seasons marked in dates. There is approximately 2.2 million acres of public and private land to hunting in Michigan an ideal location. The weather can get quite cold in the winter, however. Other favorite big game hunts include bear, elk and wild turkey.

This state has steadily increased its deer population over the last few years helping it to break into the top 15 deer hunting states. Not all of the land in Idaho is prime for deer hunting though. However, deer thrive near their rivers and water reservoirs. The state is quite mountainous making some hunting a little more extreme. But if you like a challenging hunt, this is surely the state for you. Deer hunting season is open from October until December in Idaho. They also offer both whitetail deer and mule deer to hunt from.

Last but not least is the great state of Montana. Montana used to be among the Top 10 states to hunt deer, however disease outbreak has lowered some of their populations. However, it is still an amazing state to hunt deer in because they still have above average deer populations and a vast amount of land to hunt on. Montana’s deer season for both whitetail and mule deer runs from September to November. Be sure to check out their government site for more information on limits, laws and regulations pertaining to deer hunting. This is a beautiful state that is worth travelling to for hunting.

This Top 15 deer hunting states offer a wide range of hunting dates and styles of hunting. Be sure to check each state’s laws and how to get a license before planning a trip to hunt deer. It is always a good idea to know where some of the best public hunting lands are at as well.

Thank you for taking the time to read this article on hunting states, please feel free to comment or share this article with friends.