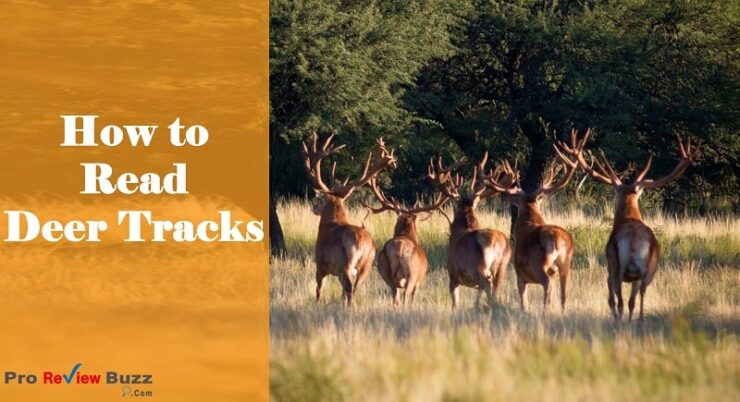 Deer hunting is one of the most exciting activities. If you want to have meat for your supper, going to the field and looking for a deer can make you get delicious meat for your dinner. In order to find them you must understand how to read their tracks.

Animal tracking can be a difficult adventure. Reading deer tracks, on the other hand, is the most straightforward way for beginners to begin their tracking adventure. Many times, you will note the deer hooves resemble something you have probably seen before. They have the form of broken hearts. It’s just in the mud where you can see how they look. That way, you’ll be able to identify their direction and, if you’re very keen, even their gender. Furthermore, the sizes of different animals living in different areas vary. Terrain dwellers are known to have much larger hooves ranging in size from 2 to 3 inches.

While going for a hunt, it is crucial to know what exactly to look for. Unlike old days where deer hunting was just a matter of sitting and waiting, things have changed a lot. Most successful hunts involve analysis of  tracks to identify their possible location. Instead of just sitting in a tree and waiting for deer to hopefully appear from the woods, it is about time you do things differently. All I mean is that you need to hone your skills in tracking deers and most importantly identify deer trails correctly. That way, you can make the most out of your hunting endeavor by going to places with a high probability of catching a deer.

During  your hunting you will come across many deer tracks and it can be difficult to study them closely. But this is the trick: everytime you find a series of deer footprints, go to the very first one. While that alone might not be helpful in identifying the direction, it is a good starting point of what you can discover from studying the deer trails which have a much greater look. From there you can proceed to study more subsequent footprints to accurately identify the  direction of the deer.

To make the most of deer tracking, it is always necessary that you find the left front, left hind, right hind and right front foot. If you are able to see all four legs, then there is no doubt that you can tell whether the tracks belong to a deer. That way, your work becomes more simple and you can observe more details of the track. This includes the deers actions and potential intentions. It is the art of reading deer footprint that professional hunter use to nearly track deers and catch them even in a difficult terrain

Four you to locate all the four footprints of the deer, you will first need to identify the first two. To do this, you will have to pay close attention to the whole trail rather than individual footprint. Stand right at the one foot on each side of the trail and try to figure out the next move that the deer would probably take.

If you are tracking deer footprints on leaf litter rather than mud, you should consider marking the positions with something like popsicle sticks to help you study their pattern quite easily. More practise will be needed before you can learn how to locate the left and right footprint of deer though.

Given  that you now know how to look for both left and right track, then let’s look at how you ought to identify front and hind tracks.

In order to determine the front and hind tracks, first identify one of the sides either the right or the left, then try to compare the subsequent tracks to see if they match. If you first chose to find the right limb and the subsequent limbs seem to match, then you have nailed it. Always choose to start with the side that is much visible, clear. Zooming will also help you get more details for thorough examinations.

What makes the difference between the hind and front tracks is the fact that front footprints are much larger than hind footprints. Something else to note is that deers normally walk with their hind track partially on top. This means that front tracks land first and hence the one on top is probably the hind track.

Let’s now take a quick look at how a deer navigates. By calculating the distance between tracks it is possible to know how fast the deers were moving. If the distance is close to each other, then there is a possibility that they were moving at fast speed. However if they are a little bit far apart from each other, then there is a high probability that they are moving at slow pace.  Galloping,  walking, and trotting are the fundamental gaits that clearly describe how quick the deer were moving.

Many at times deers love strolling and in the process they easily reveal both front and hind  tracks alternating each other side by side. The distance between each pair of tracks ranges between 13 to 26 inches. In addition to that, deers love walking as their movement style. This is because they need to always remain alert to bird alarms, surrounding noises and possible danger. What’s more, they are able to save a lot of energy while doing so. When deers run at higher speed, it is an indication that there was a change in state of emotion and it can be easy to determine where they are running to. Something else you will realise is that when deers are not in pursuit or threat, they will most certainly trot. That will indicate a level of curiosity in them even though it might not be necessarily as a result of danger.

In addition to trots, gallops can as well be used to identify the direction of the deer. If you encounter a place where there are four tracks in a row, then that is possibly a gallop. They indicate intense feelings among the deer. This makes the deers run quickly especially when they think they are facing some form of danger.

With the knowledge of this gaits, there is no doubt that you can better read the pattern of trails especially when you are hunting over a very rough terrain

It will appear difficult to track deer, but this does not imply that it is impossible. It just takes time and focus to learn how to interpret deer tracks. Tracking is nothing more than predicting animal activity and learning exactly what to look for and how to do it.

Having covered the different ways of identifying deer tracks, how to study their limbs, how to identify deer direction  and speed, and finally differentiating between male and female, we are confident that these concepts combined with practise will make you a pro hunter in a matter of days.