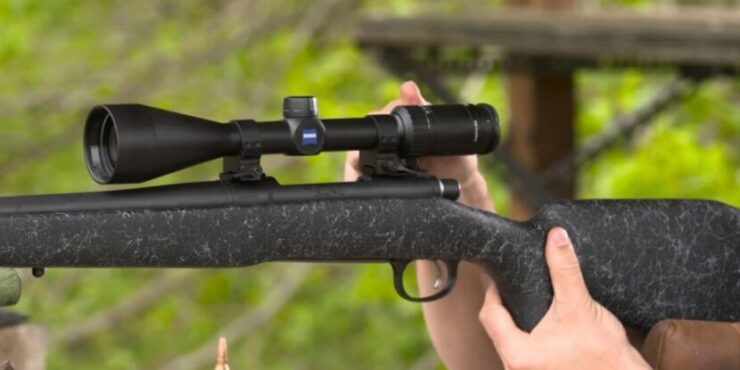 Having trouble with using your scope properly? The bullets just won’t hit the targets, right? It is probably because you haven’t quite grasped or mastered all the functions that a scope magnification has to offer.

One of the primary functions of a scope is to magnify the object from a faraway distance so that the shooter can spot the target easily.
However, if you use magnification on your scope, you need to keep a couple of things in mind. Do not worry, my friends, this article will tell you all about it and explain how to use scope magnification for 800 yards. Here you can check review of best scope for 800 yards

What Is Scope Magnification?

The name itself is self-explanatory, but allow me to make it a tad bit easier for you. When you hear the name scope, in your mind, you can see a clear picture of a tube that works somewhat like a binocular.

That is the main purpose of the scope. To detect a target that is difficult to detect with the naked eye and zoom it so that you can see your target clearly. This is what scope magnification is. The question is, how much can it zoom? It depends on the power of the scope entirely.

There are numbers indicated on the scope which will tell you how many times the image showed the scope is being magnified.
And the numbers are written like 8.5×50, which means that the scope has a magnification of 8.5 times, and the objective lens is 50mm in diameter.

There are scopes that have variable magnification options, which come in very handy when you are hunting.

The scope magnification number basically tells you how big your target seems from up far when you compare it to the naked eye. This physical aspect of the scope depends on a number of things like the wideness, arch, diameter, and the material of the lens and their coating.

Once all of this is know, you have to know some of the properties of the lens, and they are mentioned below.

The lens’ primary job is to capture the light that is hitting off from the target and bend it in such a way so that you see a zoomed version of the image. And the more lens you have, the better the magnification will be.

Just like a mirror, the magnified image on the lens is upside down. So there is an erector that flips the image right side up so that you can make your shot properly.

Now you have to get a good quality image to make your aim; hence the ocular lens is extremely crucial, or else everything above just fails. It maximizes image quality, and the diameter of the ocular lens gives you the eye relief from the distance between the sight point of the scope and your eyes so that you can get a focused image.

So once you get the image, now you have to analyze it. The relationship between the image and the target is quite simple and proportional. If the scope has a magnifying power of 3x, that simply means that the target is three times closer to you than it is actually in reality.

You might be amazed by the perks of this feature that scopes have. However, too much magnification is not good at all. Here are some of the physical limitations of scope magnification.

Chromatic aberration is the fringing of the lenses, and it can become a huge problem when magnification increases.
This is basically when you have zoomed in too much that the white light is breaking apart and causing you to see colors in a rainbow pattern.

And it will happen if you zoom in more than you need to zoom on a particular object. This will result in the image becoming blurry and often fringy with combinations of the color purple.

Often when you magnify too much with a low magnification scope, it will cause the surroundings of your target to curve around. Usually, the focus point is the center of the lens or where the reticle is. This will cause your image to be blurry and aim to be inaccurate.

The effects are similar to that of field curvature. And the resulting image that you see on your scope will be blurry, which may cause your aim to be erroneous.

When you divide the diameter of the objective lens by the magnification power of the scope, you get the field of view for a particular scope, and it is essential. The field of view means how much of the surroundings you can see beside your target.

You must know the surroundings as you are playing with real guns here because otherwise, there can be serious damage to the third party. As you increase magnification, the field of view decreases. It means that lesser area around your target is visible, which can be dangerous.

Greater magnifying power means that the scope has a thicker or greater number of lenses. Therefore we will absorb more of the light energy and refract the light waves being reflected off the target. Hence, a higher magnified image will produce a dimmer image.

The range from 400 yards to 800 yards is said to be the long shot range. To be shooting at this range, you need a scope with a magnification of about 12x to 14x. That is a pretty potent power and can be hard to maneuver. However, you must remember that this is not a fixed rule.

If your natural aim is phenomenal, then you can shoot a target in a long-range with a lesser magnification as well. Ultimately, this comes down to the shooter and the skill set he possesses. But usually, this is what you need for scope magnification for 800 yards.

See how basic this feature is and how you can go a long way if you just understand the mechanics behind it? Just play around with the magnification function, and soon you will get the hang of it. Even professionals sometimes struggle to get the appropriate magnification for the right moment. So, my friend, don’t be hasty at all.