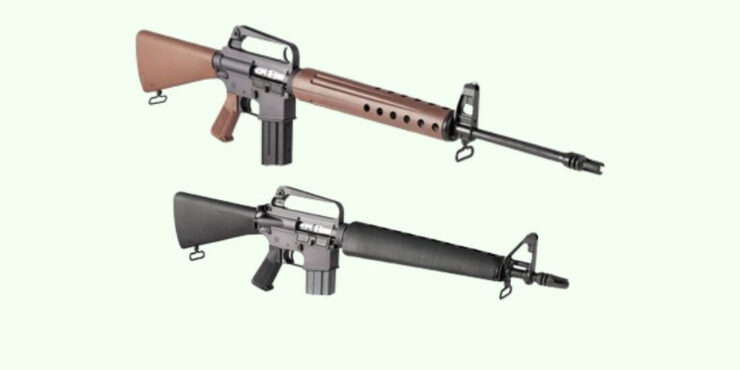 The Bureau of Alcohol, Tobacco, Firearms, and Explosives (BATFE) classifies a rifle as “Curios & Relics” if they are manufactured at least 50 years earlier from the current date. These classic and retro rifles are a sought after addition to any gun enthusiast’s collection. But they don’t come at a cheap price. Fortunately, this rising trend for retro rifles has opened up a new market that manufactures classic rifle replicas.

And the best thing is that they cost a lot lesser. Many companies have joined this industry creating a lot more choices in the market. This retro rifles guide is the right place to be if you’re in search of the best one out there.

Among the many you can choose from, we have made a comprehensive list of the ones that stand out the most in terms of overall performance.

Manufactured by one of the best players in the retro rifle industry, this first one is sure to impress you. It models the original 605 rifle form Colt that was first produced in the 1960s.

This is going to be the perfect rifle if you’re looking for that retro design and quality minus the overwhelming price tag.
Like the other rifles in the BRN-605 series, it follows the design of the XM16E1 for both its upper and lower receivers.

And like the original, its entire bolt is chrome plated to add to its overall durability. Chrome plating also makes it easier to clean. The barrel is also capped with a “duckbill” flash hider.

Unlike the original 605s, which were having a problem with their reliability because their dwell time wasn’t long enough, this rifle doesn’t experience the same issue. Its gas port is designed to be larger so that the carbine will be able to run a whole lot smoother.

For a more compact rifle, this has a barrel that was made to be a few inches shorter compared to the original. Reducing its barrel length also takes some of the weight off it so it’s easier to carry around.

Following the designs of the first AR-10 developed in the mid-1950s by Eugene Stoner, this rifle is sure to give you major nostalgia because it closely resembles the classic AR. Its outside appearance is one thing but it also mimics the original’s performance with a few tweaks to improve it.

This rifle will be able to give you enhanced accuracy and even range without the need for an optic, although you may opt for an optic for a better advantage. You will need a mount for it first since this rifle’s rail doesn’t have it built-in.

Durability is achieved by using a 7075 T6 aluminum for its receivers, which is a well-known metal alloy because of its exceptional shear and tensile strength. The bolt is chrome plated for added protection against wear.

For greater reliability and better accuracy, it uses a standard .308 Winchester for its cartridge. And it is lightweight compared to other retro rifles in the market which makes it easier to carry around.

Its other features include a trigger-style charging, a flat slip ring, a receiver extension, and a rear sight that’s period-style. The grip is very nice and comfortable too. Overall, its features will be able to level up your shooting or your hunting game.

A classic look coupled with a 21st-century performance, this is, without a doubt, one of the best out there. Many gun enthusiasts like it because of its nice finish look and its high durability. This retro rifle is now within your reach without having to go above and beyond your budget.

Designed using the first-ever prototype of the classic AR15, it incorporates some of the original features while adding some enhancements for better overall performance. The handguard has the same size as the original, and it also uses a similar A1-profile barrel.

Its upper and lower receivers are constructed with a 7075 T6 aluminum, and they are anodized to ensure it will be able to handle the wear and also the force of the recoil. With this durable build, it is will also be sure to last longer.

On top of that, its carrier group is constructed using 9310 carbon steel, which has high fatigue strength and high toughness. And it comes with a 25-round magazine that is a replica of the original.

Other features that it has is a flash suppressor, a trigger-like charging handle, and a front side base. You can add a scope if you want to so you can further enhance its range. In terms of accuracy is does help to make your shots more accurate.

This last rifle was made to be a replica of the first-ever manufactured AR-15 used by the U.S. military in the 1960s. It’s also what was famously used during the Vietnam War, so it’s not only a rifle, but it has a piece of history with it. If you’re a gun enthusiast, this rifle will make a great addition to your collection.

The outside appearance is very appealing with its green finish. It will also be useful when you want camouflage when hunting. Other than its design, it also has some 21st features that weren’t in the original to enhance its performance.

The smoother grip is one of its many features with its triangular handguard and A1 stock. Its bolt carried group is hard-chromed which improves its durability and it also has a charging handle with the same triangular style as the original.

For more accurate shots, it has sights that use the A1 configuration with its front sight enabling adjustment for the elevation while the rear sight provides windage. These have great stability, and they won’t loosen even with strong recoil.

Adding to its many features is its 20-round magazine made with an alloy of carbon and steel. Considering the heavy-duty metals it’s made of, it isn’t that heavy to use. Other features that it includes is a flash hider, a safety/selector, and a bayonet lug with its barrel.

Things to Consider Before Buying

Your rifle will be going through various forces and wear that can potentially damage it. So for it to last long, it should be made of strong materials. Some rifles also have a coating that helps them to be resistant to rust and water, this will be very useful so you can use them under any weather. The longer your rifle can last, the more value you’ll be getting for your money.

Resemblance to the Original

Your retro rifle should be able to achieve the same look as the original. If it has retained some of the features, then that will be great too. These rifles are more than just for shooting and hunting; they can also be part of your prized collection of vintage guns.

For it to have a great performance, it should have all the necessary features that can help in improving accuracy, range, and also its stability.

Some rifles have built-in sights while others use military-grade cartilages. Many features can also contribute to the overall performance, so it’s best to check these out.

The most significant advantage retro rifles have is their cheap price range, so there’s no need to overspend to get a good one. Always check if the features correspond to the price so you won’t end up spending too much on a rifle that won’t be able to do its job properly.

To get more value for your money find out if it has any additional features like a tight gripping stock and a flash hider.

What’s so special about retro rifles?

These are exact replicas of rifles that are considered to be “Curios & Relics” by the Bureau of Alcohol, Tobacco, Firearms, and Explosives (BATFE). They give a very nostalgic feel and have many great features. Also, they are more affordable than the originals.

Are all the features the same as the original?

This will depend on the manufacturer, but usually, they replace some features to give it a performance boost.

How can a rifle be considered a “Curios & Relics”?

If a rifle has been manufactured more than 50 years ago, then it can be considered by BATFE as a Curios or a Relic.

Are these harder to use?

There are fairly easy to use, and they operate on the same principles as recently manufactured rifles while others may have features that can be unfamiliar.

Is this worth the money?

Whether you’re a gun collector or not these will prove to be worth your money. Aside from having a vintage rifle, they also have a lot of great features.

Retro rifles can make a great addition to your collection or your hunting gear. It has a combination of classic design and efficient performance. So if you want the best one, this retro rifles guide will be able to help you.