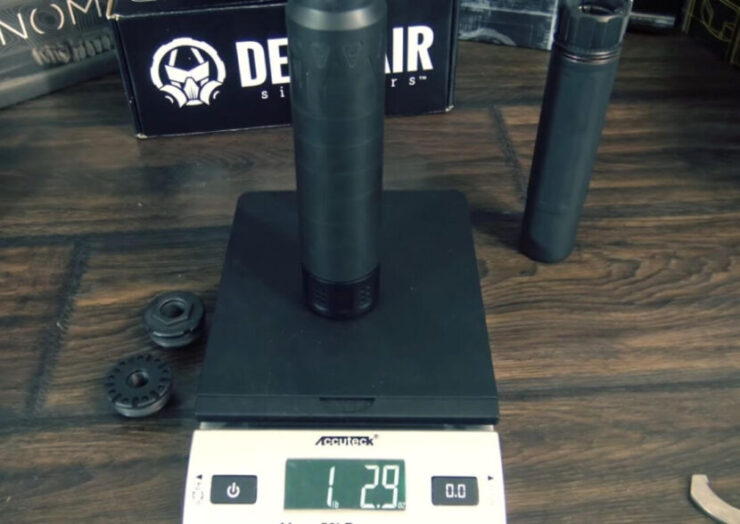 The market for suppressors is oversaturated with innovative and technological advancements. And the manufacturers for suppressors have shown an incredible surge in developing stronger and more advanced multi-caliber suppressors in the past decade.

While the demand for more specified caliber suppressors has gone down over the years, and the options for multi-caliber increased, it has become more confusing and tougher for any beginner to choose the right suppressor.

Why You Should Get a Multi-Caliber Suppressor

Whether you want to suppress center-fire or rim-fire pistols and rifles, you can easily adapt to any of those options if you own a multi-caliber suppressor. It simplifies the process of using a suppressor for different uses.

Investing in a multi-caliber suppressor is significantly more budget-friendly than buying several suppressors for specific calibers. With the added tax for each caliber, owning a multi-caliber is much more cost-efficient.

Why You May Not Want to Get a Multi-Caliber Suppressor

There is one disadvantage to take into consideration before buying multi-caliber suppressors; that is its “one size fits all” feature, which makes it a bit difficult to handle when you’re using smaller firearms.

Smaller caliber host firearms cannot handle the large, heavy-duty multi-caliber suppressors, which might cause a bigger issue of balance down the line for any beginners.

Another disadvantage is the ability to change front end caps for their host guns. It’s important for you to make sure to change out small diameter end caps before using a larger caliber host gun. Some suppressor manufacturers have come out with new interchangeable end caps to combat this problem.
And it is best to check reviews to buy multi suppressor online or even at your local gun shops.

If you’re just starting to show interest in buying suppressors for firearms, it’s best to follow these tips and rules most gun experts always believe in!

Modify Your Most Commonly Used Firearm

Finding the right host gun with the specific ammunition can create one of the best personal shooters. And although, most gun enthusiasts would recommend buying a rim-fire suppressor.

It’s always best to modify the firearm you use the most, which can also be a center-fire rifle model. If you suppress the gun that you enjoy using the most, then you’d get the most out of your suppressor.

And if you use a precision rifle, buying a rim-fire suppressor won’t do you much good other than just sit on your shelf.

For a beginner, a suppressor’s ability to reduce decimals is the most attractive part of owning one. But a common issue with manufacturers is that they usually self-report the data for the generic host guns.

So as the numbers and calculations rarely tell the whole story, aspects such as mounting systems, modularity, weight, or even length can determine the quality of the suppressor.

Considering all the modifications such as muzzle system and mounting devices, the weight might already be too much to handle.

Mounting Options Should Be Considered

Direct thread mounting is the most common method to attach a suppressor. But this method is best for a dedicated suppressor or if you’re not looking to change the host gun.

This is often not the case for multi-caliber suppressors, as it can be used for different host guns and can be modified quite often. It’s best to find what’s best for both your muzzle devices and the model of the host. So, modify your own setup with the right mounting option of your choice.

Suppressors won’t fully cover or silence the gun’s noise feedback, even if your rounds are subsonic center-fire with a longer barrel.
It’s always best to protect your hearing, as the damage of the sound may be irreversible. Some hosts don’t necessarily require protection, but this can differ depending on a specific modification, so it’s better safe than sorry.

Although suppressors are usually pretty low maintenance but considering the high cost of replacing these devices, it’s always best to know how to maintain and keep them at their peak.

Why Do You Need to Clean Suppressors?

There are specific suppressors that need maintenance more often than others, and some might be sealed units that can’t be removed or taken apart for the internals to be cleaned.

However, if your multi-caliber suppressor can be taken apart, it’s best to clean them as often as possible.

Build-Up of Carbon and Other Residue

The internal machinations of center-fire rifle suppressors usually deal with a significant amount of heat and carbon build-up. The build-up becomes heavier with each rounds being put through it.

Some units also come with specific tools to help you take the device apart, usually for subsonic rifles and pistol cartridges.
A mixture of powder residue, bullet lube, and lead can also build-up on the suppressor. Although this may not affect your suppressor right away, it might significantly lower its lifespan.

Get the Necessary Information before Buying Your Own Suppressor!

It’s best for a beginner to know what they’re investing in, especially if it’s a suppressor, as they can differ from one model to another.

There are common mistakes that a beginner can make while buying something that relatively expensive. So it’s best to know what exactly your firearm needs before you invest in a multi-caliber suppressor!