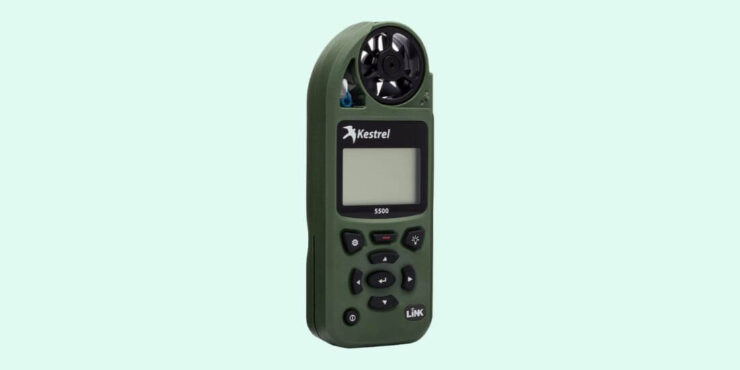 Believe it or not, the question of which one is better between the ” Kestrel 5500 vs. 5700 ” is simpler than it may seem at first.

Today, we’ll learn why these devices are great by reviewing their specifications, performance, and overall reliability on the field.

By the end, we’ll have a clear view of what their differences are, and which one is the better pick for you.
Let’s start by talking a little bit about the Kestrel 5500.

The device at hand is an advanced weather meter superior to the brand’s most popular products like the DROP 3. With features easy to use and accessible, the Kestrel 5500 is a convenient tool most adventurers will enjoy.

This device is available in three colors, which you can use to your own advantage. For example, by using the yellow model, your chances of losing the meter are minimum because it’s more visible, even on the ground. The other colors, flat earth or dark green, are better to keep the unit hidden.

The Kestrel 5500 comes as an improvement to previous devices offered by the brand. Its predecessor, the Kestrel DROP, needed a smartphone to receive live atmospheric measurements. With the 5500 model, on the other hand, that’s not the case.

While you’re out there, you can check the measurements on the device’s own screen. Still, connecting a smartphone is yet a possibility due to the Kestrel LiNK app, which will help you to log data on the phone.

Or, you could just ditch the phone entirely. The device itself offers the capacity to store up to 10,000 data points, allowing users to store the data in the device.

The battery used by this device is a single AA lithium battery, which is safe in a waterproof case. If you have no other choice, you could use alkaline batteries instead, but make sure to remove them afterward. Otherwise, the device may suffer some corrosion.

This device offers long-lasting performance, operating for about 400 hours. After that time, the battery may need replacement. Of course, features like backlight and Bluetooth could have an impact on the battery’s lifespan too.

This device is capable of providing a variety of measurements, including bulb temp near water bodies. For accurate measurement, the bulb requires access to airflow with no interference at all.

Then, there’s the impeller. This feature does measurements on the direction of the wind, crosswind, and headwind. For protection, the impeller has a plastic cover, which you can flip to the side.

Since the impeller is fragile, the protective plastic cover is a great addition. 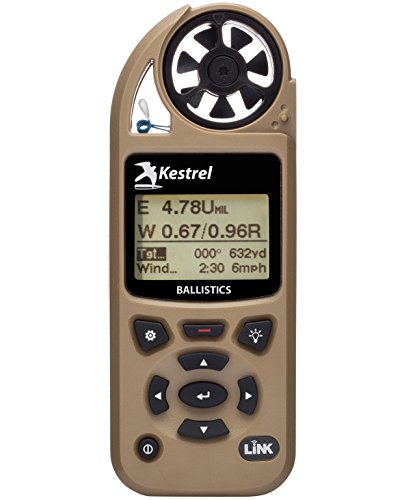 While we’re out there doing our thing, securing where the bullet hits is always a must before pulling the trigger. It may sound easy, but doing that could be tricky without the right tools.

Luckily, we have devices like the Kestrel 5700, a ballistic weather meter to sort out the environment and get the best out of your shot.

The aesthetic design of this device is only one of its top features. While you’re out there, the Kestrel 5700 blends smoothly with camouflage clothing and the environment around you.

Even though the device has a bit of a learning curve, the easy mode makes it pretty easy to understand how it operates. After figuring it out, the device offers accurate measurements on altitude, heat stress index, temperature, humidity, and many more.

Users will also appreciate the larger screen and the improved screen resolution offered. Reading the data isn’t as difficult as it was with old models, which is quite pleasant.

This new Kestrel meter offers some incredible improvements to enhance device performance. It isn’t only about more user-friendly features either, as the device offers way more than that. For example, the 5700 needs a single AA battery instead of the two AAA batteries required by old units.

The case is protective too. Should the battery leak, you don’t have to worry about acid messing up the device.

Due to its durable design, the device is capable of working well in tough environments, particularly. The Kestrel 5700 passed drop tests satisfactorily, even when it fell from eight feet over a concrete surface.

This device is perfect for both target shooters and long-range hunters. The ability to provide real-time information on weather is quite helpful for those activities. Furthermore, the ballistic adjustments offered for elevation and windage measurement are quite spot-on too.

The calculation of these adjustments varies depending on the unit, which could be True MOA, Shooters MOA, centimeters, Turret Clicks, and Mils.

Answering this question is quite simple. Many people have different opinions on the matter, with some suggesting the 5500 over 5700 or vice versa. However, since you only need a single device, then the Kestrel 5700 is the way to go.

The Kestrel 5700 offers everything the 5500 does, but better. Do you want a durable device with a long-lasting battery and resistant to the environment? Then the 5700 model is the one for you.

Sure, if your budget is tight, the 5500 may be the better pick, but paying a low amount of money should be the only reason to consider buying this device instead of the 5700.

The Kestrel 5700 is as convenient as they get. It’s compact, efficient, and capable of making multiple measurements. Even better, reading those measurements is even easier on this device due to the incredible screen.

Lastly, the Applied Ballistics system from 5700 has proven to be more accurate than the Strelok, offered by the 5500 unit. So, yes, while some would prefer the 5500, the Kestrel 5700 is far superior.

During our ” Kestrel 5500 vs. 5700 ” article, we’ve covered only a small portion of what these devices can do. Now that you know which one is the better pick depending on your needs, and budget, you’re in a better position to invest your money wisely in the best meter.