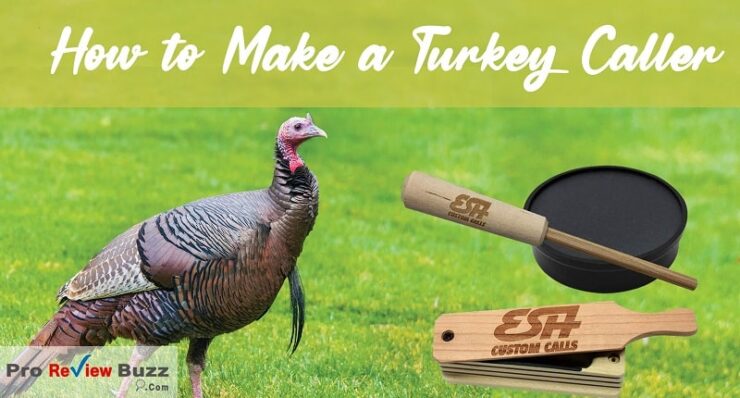 It takes a lot of  experience  for one to able to call turkeys, the type of practice that irritates people who don’t appreciate stuff like the sound of a perfect yelp or even how a piece of roughed up glass and a stick will help you to communicate with a wild animal

Why would one need to make a turkey caller?

The Wild turkeys have been known to communicate with each other using the language of yelps, putts, gobbles, purrs, and other sounds. And because of that, the hunters have come up with devices that can be used to mimic these sounds and thus lure turkeys within firing range. The device is called the turkey callers and they are found in stores and online vendors, but as much as they can be found on these platforms, many hunters choose to create their own.

Why will anybody make turkey calls at home while they can be purchased online or at any goods store? For beginners, it gives you the satisfaction of making your own turkey caller. It would also save you money in certain situations (if you already have the equipment) and is a necessary skill for someone who is self-dependent. With a turkey caller on your hand, you are gonna enjoy your winter months.

Before we get into how to make fantastic turkey callers, it’s a good idea to first hear about the different kinds of calls you can make. Here are with me six traditional turkey calls that may interest you, let us look at them.

The friction that exists between two pieces of wood grinding together produces sound in a push-button call. The caller presses either up or down on a spring-loaded wooden dowel that is fixed to a block of wood. The wooden block rubs against a pyramid-shaped piece of wood fixed to the bottom of the call box, producing various sound effects based on the speed with which the dowel is pressed. Push-button calls are well-known for their simplicity. Most of the experienced hunters would sometimes not use them because they think they are just for novices. For sure they may be easy, but their efficacy does not suffer as a result.

This is another kind of friction-based call which is a slate call, it is also known as a pot call. This is a circular disk or “pot” that is made of ceramic, slate, or glass that is used together with a striker. The striker is made of wood, carbon, or aluminum and is used to produce various sounds when it comes into contact with the surface of the pot. The striker is scraped on the disc at different angles, speeds, and intensities to produce about every turkey sound one can possibly think of. The amount of sounds and patterns that a slate call can make is only controlled by the caller’s expertise and experience.

Locator calls are very special callers that may be used to find a turkey very early in the morning when he is already on the roost, or even in the evenings to pinpoint his position inside a patch of woods or a plain. There are different kinds of methods that you can use to make more natural sounds, that is, depending on the kind of locator call you are using. What is more important with these calls is that; be in a place where you can conveniently disappear if you call and a gobbler is still within firing distance.

Diaphragm calls, well known also as mouth calls, are horseshoe-shaped, thin instruments that produce sound by vibrating either a rubber or latex reed. In order for this type of call to work, the caller has to blow air onto the roof of their mouth while keeping the diaphragm call steady in their mouth, in doing so, you will be contacting the reed and causing a series of vibrations. By adjusting the pressure and the direction of the air, the hunters can successfully manage to mimic every sound that a turkey produces.

A box call is one of the common turkey calls that are simple enough especially for beginners while being flexible enough for experts. A box call, just like a push-button call, produces sound by friction. for this tool to work, a small wooden box and a wooden lid scrape together in order to produce yelps, clucks, cuts, purrs, whines, cackles, among other sounds. Master this call and you’ll be unstoppable to a tom.

The original turkey calls are wing bone calls. Just as the name suggests, these calls are made from the wing bones of a turkey, which are put together to form an instrument that early hunters used to lure gobblers even before commercial calls were available. Wing bone calls are much easier to use. For the caller to make the yelp or some sequences of yelps by simply tightening the lips around the end of the wing bone and creating a puckering or kissing sound.

How To Make A Turkey Caller

If you are a turkey hunter, one of the things that you would like to know before going turkey hunting is how to make your own turkey calls. So let’s take a look at those turkey calls that you should be making.

Anyone who likes to hunt turkeys should make their own turkey calls. This type of turkey caller does not need any special instruments, because you already have anything you need all-around where you live. The following are the materials that you will require for you to get started with making the pill bottle turkey callers.

This turkey call which has a wing bone is the best for making accurate yelps. Let’s take a look at how you can make one for yourself.

This type of turkey call is typically a homemade variation of the turkey pot call. All you will need is a striker, which you’re likely to have if either you’ve been turkey hunting or you can buy a new one in any nearby store.

If you are interested in using a special jig that is designed specifically for making turkey mouth calls, then you have the solution.

With all these processes out of the way, you are now ready to build your own turkey caller. You should keep in mind that for a good call, you must be good too. Anyone with a keen ear stands a chance to make better callers. It is really amazing to know that real turkeys sound terrible in contrast to their human impersonators; therefore, most of the time they mistake everything they hear as another of their own. As much as the sound matches perfectly with that of the real turkey, overcalling raises suspicion with them.Therefore if you are new to calling turkeys, I hope you have learned a lot in order to improve your calling technique —and make you the best turkey caller around. with a turkey caller in your hand, it can seem difficult at first. This article is helpful in shedding light on how to quickly create your own caller.