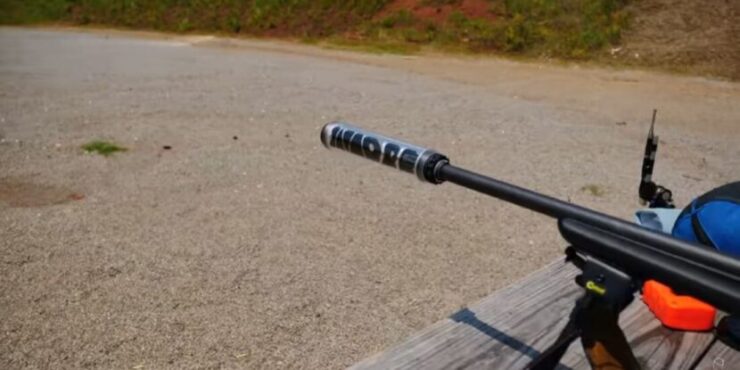 Imagine using a silencer with absolutely no sound at all. If you are fond of shooting or have a preference for animal hunting, this article is dedicated to you to make a suppressor quieter.
The quieter the gun is, the more amazing your shooting experience gets.

Well, the baffles in the suppressor make it possible to expand the propellant gas and reduce the sounds. But adding more baffles to reduce sound might make your gun heavier. Will it be helpful then?

The answer is yes, and also no to some extent. Noise reduction depends on the baffles, it is true. But how many baffles are you willing to stack to reduce noise? There are long suppressors as much as 31 inches. But with these long tubes attached at the end of the guns, the efficacy is disturbed.

Also, it makes the weapon heavy to handle, and this can lead to missed shots. In experts’ opinion, monocore baffles can be customized to make it even quieter. Surely they are already heavy, so customization can be done on the fully welded no-tube baffles to make them quieter and lighter.

Why Are Guns So Noisy?

Ever wonder why so much sound is produced when guns are fired? Even the smallest pistols produce a high-intensity sound.
And all this sound comes from the smallest part of a pistol: the cartridge. This cartridge contains propellant powder. When ignited, they burn and produce a massive amount of gas. This gas causes the bullet to fire out of the guns.

The ammo has no power within itself to produce such high sound. It is the gas that produces it. And all this occurs with a simple push on the trigger.

How to Reduce Gunshot Sounds

In reducing this massive amount of sound, suppressor comes in handy. They act as a medium between the target and the firearm and reduce noise. If anything is put in front of a muzzle, it will reduce the sound. But at the same time, it will hamper the efficacy of the firearm. That is why silencers or suppressors were invented.

They are cylinder-like structures that are detachable or can be fixed with a specific firearm. And they come in various types, and with improvisation, engineers have successfully made the quietest suppressor recently.

Inside of a Suppressor

The suppressors have baffles inside that aids in noise reduction. These are hollow circular structures that cause gas expansion. If the high-pressure gas gets trapped within the baffles, it is bound to reduce the sound.

In the expansion chamber in front of muzzles, there are numerous holes that cause the gas to expand and trapped in the baffles. The baffles permit the passage of the bullet via a hole within it, and so the target is acquired. But the question still remains, do more baffles make a suppressor quieter?

Here are the types of baffles;

These are user-serviceable. You can dismantle them and clean them without any worries. They are user friendly and also reduces noise to a great extent. The baffles are simply stacked one after the other inside of a suppressor to create it.

Then comes the sealed variety, which is not so popular for its sealed parts. They can be tack welded, cap welded, fully welded no-tube, fully welded stack, and monocore. They are described below.

Monocore, as the name states, come in a single solid cylinder. Instead of numerous baffles, they are joined and sealed together. They are heaviest and also the quietest, according to users. As it is a single tube, the baffle designs are unique, and they are enhanced to make it quieter.

Here, the baffles are welded at 2 or 3 points on edge and stacked outside. Then they are pushed in the tube, and the caps are welded.

The front and rear caps are only welded. And the baffles remain stacked but not attached to the tube.

Here each piece of the baffle is attached to the next one. Later the caps are welded on.

Here, no external tube is present. The baffles are designed in a way to make it look like a tubed baffle, and they are welded together.
For their light weight, fully welded no-tube suppressors are popular among users. But due to its’ maximum noise reduction capacity, monocore has gained attention.

Newer inventions and experiments are still on the process of making a suppressor quieter. The SOCOM300-SPS is the quietest suppressor built till now, but the baffles are worn out after few rounds.

It is true in the sense that stacking baffles might make you a quieter suppressor, but it might not be user-friendly then. We hope this article gives you insight on the mentioned topic.