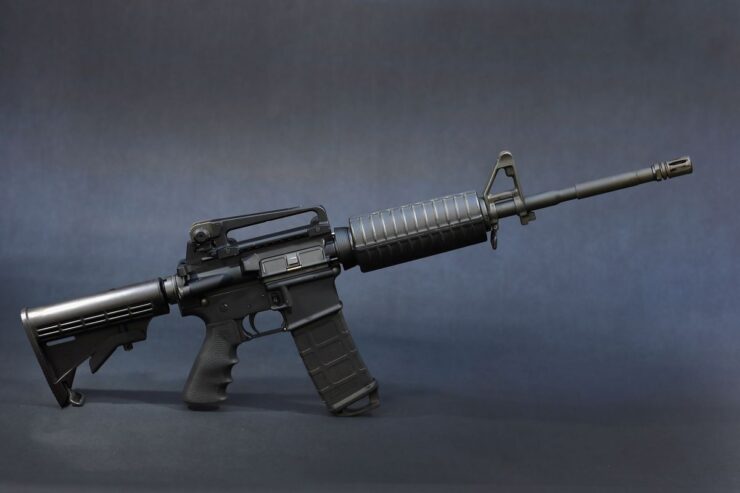 The AR 15 is a semiautomatic rifle and it has an insane firing speed with each bullet having a precise shot and hitting its mark. The name AR 15 means an ArmaLite Rifle 15 and when fired, it can meet up with even a target that is at a far distance as long as it was focused on the target. Even though a lot of gun lovers admire the AR 15 rifle, some others despise the AR 15 because of the news of chaos that surrounds the rifle. In the past years, the AR 15 gun has been used in events where there are mass shootings and it does not also help that the gun has been fashioned to resemble a military assault rifle.

For some people, because the AR 15 rifle is hugely associated with a lot of bad memories, pain and hurt, they find it hard to accept the rifle especially now that it is made accessible to civilians. As a result of the resistance against the accessibility of the AR 15, there have been series of prohibition attempts against the gun, but doing this did not procure the expected reaction. Instead of the AR 15 rifle being boycotted by gun lovers, it was sought out and purchased even more than ever. Because of the craze that surrounds the AR 15, the rifle is often referred to as Assault Rifle (as its meaning) instead of its actual meaning; ArmaLite Rifle.

The History of the AR 15 Rifle

There is a lot of controversy that surrounds the AR 15 rifle and when it comes to the gun; sides have been chosen. Some people love the gun, while others simply despise and dread the existence of the gun. This fact is mostly influenced by the history and origin of the AR 15 rifle. For there to be so much mixed feelings about a particular kind of gun, it means that an event or certain events have occurred over time to influence the mindset of the public towards the AR 15. Since the AR 15 rifle has been readily accessible to the public, it means that almost anyone can get their hands on the gun.

It is no news that everyone has different intentions which could be good or bad, and with a gun in tow, intentions can easily become actions (either good or bad). Some people after getting their hands on the AR 15 rifle have used it to terrorize and cause harm to others; this is one of the reasons why there have been calls to ban the production and sales of the gun. The AR 15 means the ArmaLite Rifle and it was named after the company that produced it in the 1950s. In the 1950s, the ArmaLite company did not record a lot of sales as there was an unexpectedly low purchase rate, and due to this problem, the ArmaLite company sold the AR 15 rifle design to the Colt company.

When the Colt company got the rights to the ArmaLite rifle brand, the company initially reached out to the U.S. military but the military appeared to be uninterested with purchasing the guns at that time. Some time passed and a salesman for the Colt company was able to deliver a remarkable sales pitch that captivated and enthralled the then Air Force Chief General Curtis LeMay. The Air Force Chief purchased some units of the rifles (about 80,000 units) and began to push for the recognition and use of the guns.

General Curtis LeMay was so fascinated by the gun that he made an appeal to President John F. Kennedy but his plea was rejected. The rejection was mostly due to the fact that there was another kind of rifle that was already being produced to be used in the war; the M-14. In the 1960s, the production of the M-14 rifle was discontinued on the authority of the then Defense Secretary Robert McNamara. This led to the opportunity for the AR 15 rifle to be endorsed and used in the war.

The rifles made were not the exact M-16 model, instead they were seen to be semiautomatic versions of the M-16. These rifles were now made accessible to to everyone (the U.S. law enforcement agencies and the general public). In the 1970s, the original patents that the Colt company had for the AR 15 rifle got expired. As a result of this, other rifle making companies and manufacturers seized the opportunity to start producing gun models closely similar to the AR 15. Due to the large supply and popularity of the AR 15 rifles, even though the guns were made by various companies and in different styles, the rifles were extremely similar and were generally referred to as AR 15 rifles.

Features of the AR 15

For gun lovers, an AR 15 rifle does not go by unnoticed and this is mainly due to the presence of its features.

In addition to these features, the AR 15 rifle has a very fast reloading time and this makes the process of using the gun easier and more enjoyable.

The Firing Speed of the AR 15

A remarkable feature of the AR 15 rifle is its lightning speed when it is being fired, and even if peradventure the bullet fired does not hit its mark, the gun can get reloaded in a very short and fast amount of time. The reloading speed of the AR 15 mimics those seen in the military rifles being used in war situations requiring combat action. A feature that enhances the firing speed of the AR 15 gun is the fact that the rifle possesses a muzzle of very high velocity. This high velocity muzzle contained in the gun when used with a .223 bullet round can successfully guide the bullet fired to hit its mark (possibly an animal) while also producing a powerful rebound action if the bone of the animal is hit.

The firing speed of the AR 15 can leave a devastating and destructive mark on its target and this is hugely because when the gun is fired, the bullets are ejected out of the muzzle at a high speed. If the bullets come in contact with an animal, they are bound to cause great damage to the bones and internal organs of the target. An AR 15 can fire around 2 to 3 bullet rounds per second, this means that in 15 seconds, an AR 15 can fire about 30 to 45 bullet rounds, so in a minute, an AR 15 rifle can fire up to 120 or even 180 bullet rounds (depending on how fast the shooter is to reload the gun with bullet rounds while continuing to squeeze the trigger).

It has often been debated that an AR 15 gun is able to fire up to 400 bullet rounds per minute, and this is very possible if the shooter is able to reload so quickly to meet up with this count. Also, the gas tube contained in an AR 15 has been fashioned to have a melting point. It is said that if a shooter is able to use the gun to fire as many as 600 rounds per minute, the gas tube of the AR 15 rifle will melt almost instantly. If the AR 15 rifle was a fully automatic gun, then it would have been possible for it to fire far more than 600 bullet rounds per minute.

With the AR 15 (a semiautomatic gun) however, the shooter and innocent bystanders get to be safe because stray bullets are unlikely to get to them unless the trigger is squeezed. The presence of this safety feature goes on to show just how shooter friendly the AR 15 is. Owning an AR 15 rifle can be exciting (especially for gun lovers), but before you get one you will need to check if it is allowed and in line with the laws and regulations of your country.