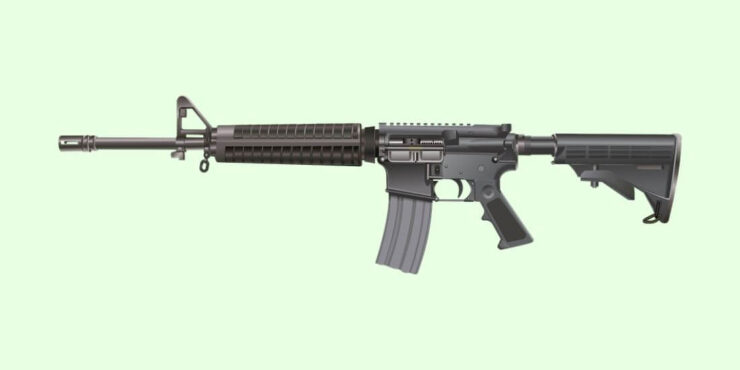 Other than being used by the military, guns are gaining popularity amongst civilians as well, be it for hunting or for personal protection. While some prefer compact and portable pistols, others prefer to step it up and invest in rifles.

Now, if you’re looking to invest in a rifle, the probability of coming across the AR15 and its successor the M16 is high. The difference between AR15 and M16 has been heavily debated. At the same time, the similarities between the two have created a widespread commotion in the minds of average gun owners.

Naturally, this makes it difficult to choose between the two. To help you make a more conscious decision, today, we’re going to contrast the two guns.

Differences between AR15 and M16

Armalite and Eugene Stoner first introduced the AR15 in 1956 to the United States Military. The new and improved rifle performed far more impressively than its predecessor, the AR10.

Surprisingly, however, the company decided to sell its designs and naming rights to the arms manufacturer Colt in 1959. They, in turn, took the designs and tweaked them to create the fully-automatic M16. The M16 became globally recognized when the US Military began using it during the Vietnam War.

Then there is the burst mode, switching to which lets you limit the number of rounds you fire each time you pull the trigger. Lastly, in fully automatic mode, the weapon is set to fire continuously as you pull and hold the trigger.

Keeping the above in mind, we look at the AR15, which is a semi-automatic rifle with no means of switching to other firing modes. In contrast, the M16 has a selector switch, which allows you to switch between all three modes. This is obviously preferable if you prioritize higher flexibility when shooting.

This is one of the more noticeable differences amongst the two rifles. Before we get on with trigger pinholes. However, it is important that you are familiar with the term ‘auto-sear’.

In essence, auto-sear is a combination of parts that were designed with the intent to convert a weapon from shooting one round per trigger pull to firing all the rounds automatically by a single function of the trigger.

Put more simply, the auto-sear functionality facilitates the ability of weapons to shoot continuously by pulling and holding on to the trigger. Since the M16 has a selector switch to alternate between different firing modes, it essentially requires a third trigger pinhole to enable the auto sear device to function properly.

The AR15, on the other hand, does not have this third trigger pinhole due to the limitations in terms of firing modes. And the semi-automatic rifle is also fitted with a trigger pocket of different dimensions from the M16. This will further prevent you from manually fitting auto-sear into your rifle.

With that in mind, it is also true that some companies sell their AR15s with trigger pockets that match the M16. All that’s missing is the third trigger pinhole, which by the way, if you did drill it into your AR15, it would transform the gun into an illegal automatic rifle.

Your best bet would be to invest in any one of them and be content with the features that come with it (unless you’re feeling rebellious, of course).

Now that we’ve covered most of the technical aspects to distinguish the two rifles, let’s get down to business: how much will these guns set you back?

If you really fancy the M16 for all its glory, we must warn you that it comes with an exorbitant price tag. You would probably be able to buy two AR15 rifles with the price of one M16, that too, if you get good pricing from the gun shop.

Whatever the cost, though, it’s important to note that you should only invest in the M16 as a civilian if your state law permits it. Also, be ready for some potential frustration, as shops that sell M16 rifles can be pretty hard to find.

Conversely, an AR15 is an easy solution due to its affordability and availability. With over ten million people currently in possession of an AR15, you would be pleased to know that it is considered to be the most popular rifle in America.

Ultimately, although it’s true that the M16 with its various firing modes is a more battle-ready rifle, the AR15 is easier to invest in, with little or no legal complications.

Now that you’re well informed about the main differences between AR15 and M16, it is really up to your preferences and requirements that will determine your choice.